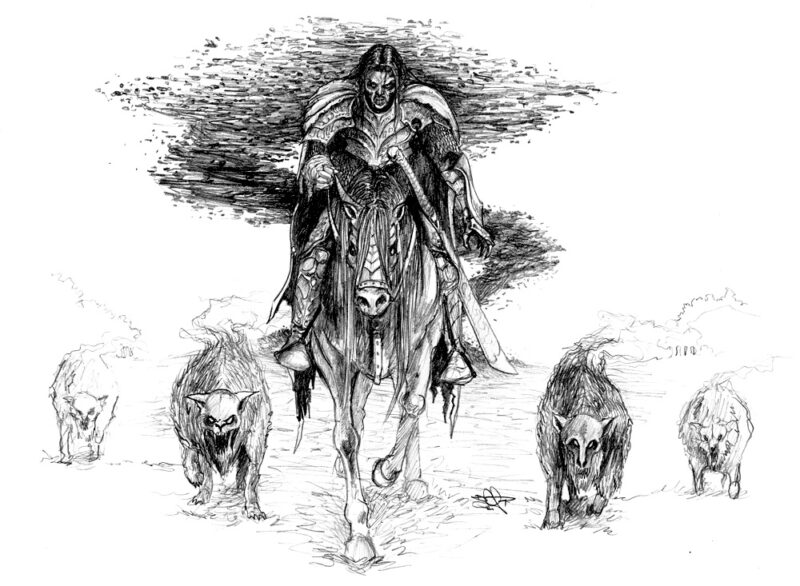 The small group which had headed out from the village and upon their journey in the late afternoon, as the sun began to drop, travelled on for as long as Žarko could make out the path in front of them. After a peaceful night, another calm day of travelling followed, with a long afternoon break. Senka had the impression that Žarko had no particular goal in mind, but neither she, and even less so Vuk, dared to inquire about this. They left all decisions to the hulking man on the horse, and were pleased to stay back and disturb him as little as possible, as he had been in a sullen mood ever since they had left the village.

Another evening was approaching, which Senka could sense from the pleasant shift in the air and the tiredness in her legs. The third evening of her new life! And an evening during which she would finally become aware that, through no will of her own, she had set into motion strange forces which, from then on, would shape not only her fate, but also the fates of her companions… While the sun was slipping slowly into the horizon, a harbinger was approaching. It started simply – Žarko had suddenly stopped his new horse, cursing at him for being disturbed.

“What is with this nag now? As if it is scared of something…” he grunted, more to himself than to Senka or Vuk. Then he turned around and looked. It is difficult to say what followed: did Žarko, because of what he had seen, first cast out a voice that signified the danger, or did Senka unconsciously lean towards the ground, crouching with a muffled scream, because of what she suddenly felt and immediately recognized. Even the ever-quiet Vuk let out a long and prolonged “uhoooo…” And at that moment, they all began to hear what were at first barely audible sounds, but which quickly became a sea of noise that steadily approached. Together with these strange noises, as if to intensify their unpleasantness, a bone-chilling cold began to prickle them, biting at their goosebumped skin; still only in hints, like small waves rolling over the shore, yet nevertheless telling of the deep dark sea behind. And again it seemed well for Senka that she was not able to see what Žarko and Vuk were staring upon: the darkness approaching.

Vuk felt fear; a fear greater than any he had known before, beyond even that which he had experienced the last day in the village when they were about to cut off his hand. Yet despite his entire body telling him to flee, he stared, as if bewitched, at the coming gloom. At first glance, it looked like a dark cloud rolling across the ground or a black apparition crawling over the earth. Whether because of the increasing closeness of the horror or their spellbound gaping at it, it seemed that the dark mass started forming parts of lesser or greater darkness, small figures who were growing in size. And very quickly in this multitude of shapes it was possible to clearly discern the dark horseman at the forefront – robed all in black, riding on a coal-black horse that was galloping towards them, standing out as the sharp spearhead pulling the whole wave and spurring it forward. To the left and right of him, forming the shape of an arrow whose striking point was the rider, dark animals sprinted. “Wolves,” gasped the hobbled thief. But these were not the type of wolves from which his name had been drawn. There was nothing natural in these dismal shapes that approached them with blinding speed. All of them were entirely black, but for their fiery eyes, which seemed to shine out a piercing red, or so it seemed against the dark surge around them; and they were much larger than any ordinary wolf was meant to be, as could be seen by the size of those running closest to the horse. Above this hellish pack and the rider at the forefront, flurried what made the scene beyond ghastly – a cloud of dark, endlessly bustling bodies and wings, a swarm of creatures that, through their almost infinite number, produced the great din which had first reached the ears of our forlorn threesome. “Du… dusk imps,” stammered a horrified Vuk. And he was right – these were ghoulish things he occasionally heard mentioned in frightful stories, little human-like things with wings like bats. Yet they could never be mistaken for real bats: the small fire they sporadically spit from their mouths made it look as if, advancing toward them, was a night sky pulsing with a swarm of disturbed stars that occasionally burned and flashed quickly, revealing for a moment the terrifying form behind each one. From the stories that Vuk heard, but until now never believed in, he knew that such creatures could only be met in the dead of night; yet in spite of this, they were flying toward them while the sun was still hovering just at the horizon, furiously flapping their wings in an unnaturally tight grouping, as if to blot out any speck of light from ever reaching the ground. “Some witchcraft for sure…” murmured Žarko. His thoughts, however, were different; although he also carefully observed the grim ensemble approaching, perhaps frightened just as Senka and Vuk were, he looked at it all through the eyes of an experienced warrior; he was concerned not with what it was, but already with how to deal with it.

“I do not know if this is something I can combat, but you must run away – now! Hide and wait for me, for I mean to return!” He exclaimed this with a clear and firm voice, before forcing his struggling horse straight at the horror that was approaching.

It was not necessary for him to order them more than once to run. “This way!” shouted Vuk, and Senka pulled Vidra in the direction of his voice, then let her dog lead her, trusting once again in the animal’s instincts. “Easy, Vidra!” she had to exclaim several times, as the dog’s nerves drove him forward in haste and Senka followed him with difficulty, stumbling and falling to the ground frequently. “Just a bit further, into the woods!” she heard Vuk shouting from far ahead. Then, quite unexpectedly, in the middle of this rush, she heard a clear whisper, as if someone’s mouth were pressed right onto her ear; she twitched, fearfully jumping away, but the voice continued to hiss: “Essscape… hide… Esssscape… hide!” And Senka continued running, holding tightly to Vidra.

“Sssstop… here… Ssstop… here!” the voice changed its command. Senka obeyed without thinking, throwing herself to the ground. She was already quite winded, though they had not been running for long. The dog dropped down at her side; they were hidden in the dark of the thick woods, well beyond the vulnerable edge of the forest. From searching eyes, they where shielded not only by the tree branches above, but also by the dense forest shrubs growing all around; were Senka able to see, she would have wondered how on earth had they managed to get through such a wall of bushes, and that without a single scratch. But she could not, just as she could not see Vuk. And Vuk was also a sight to behold: a cripple, who until now had barely been managing to pull his lame leg along the way, suddenly had taken off as if transformed into a hurried, frightened animal. He moved through the forest on all fours, now using his hands to rush more skillfully than his legs had served him earlier. He was bouncing around swiftly like a dog with a broken leg. Occasionally he would look back, trying to catch a glance of Senka. When he no longer saw her, he shouted her name out again, and, upon hearing a muffled response telling him that she was also hidden, stopped for a moment; then he scrambled immediately up to the top branches of a tree in a flash, displaying astonishing agility. Through the crowning branches of the trees he could follow what has happening back on the path they had been walking. Senka, despite all of Vuk’s earlier stories, had never asked herself how such a crippled man could have travelled so widely across the world, nor how someone barely mobile could ever have managed to be a thief; and she had just missed a clear answer to her unspoken questions.

In the meantime, Žarko had drawn so close to the black cloud that his horse simply dug his hoofs in the ground, refusing to go a single step further, despite Žarko’s attempt to spur it on with loud curses and slaps at its flanks. As the horse reared and stomped under the pressure of its determined rider, the advancing black cloud suddenly came to a halt – without any audible command, or perhaps one that was lost in the tremendous tumult of wingbeats and cries coming from the grotesque imps above. But a command had clearly been given: as one, simultaneously, the wolfish pack and the horseman at its helm paused, while a smothering of imps stopped to float in place, continuing to shade them. Then, after a slight pause, perhaps in hesitation, the rider separated himself from the dark mass and advanced forward. One horde of the imps also separated from their swarm, fluttering above the dark horseman like a miniature cloud; he was completely enshrouded in their shadows, making him seem even larger than he truly was, while at the same time obscuring clear sight of him despite the light of dusk still lingering. Žarko was hit by the full strength of that unearthly dread and cold which Senka had spoken of, and for a passing moment he too felt the desire to turn around and flee in the other direction. But even if he were to do so, he was unsure of what response he would get from his steed; the animal’s snout was now covered in foam which gushed from its mouth, and was an immovable object, dug so deep into the dirt that it seemed rooted there. So there was no better choice for him – despite the horrible chill – but to wait there for the approaching darkness. Besides, he had an odd urge to see what this strange black rider looked like up close. If nothing else, the wolves had been mustered some way behind, and perhaps he could manage to battle and overthrow the horseman alone, before they could rush to his aid. As for the winged things flying everywhere above, Žarko would rather not give them a thought. Instead, with a slow motion he pulled forth his big mace from its straps, taking it in his right hand, shifting the jagged head over his shoulder softly and effortlessly, showing disdain along with menace, whilst all the while maintaining a rigid grip on the bridle ropes of the horse with his left hand, in case the animal were to go wild again. Let the darkness come to them.