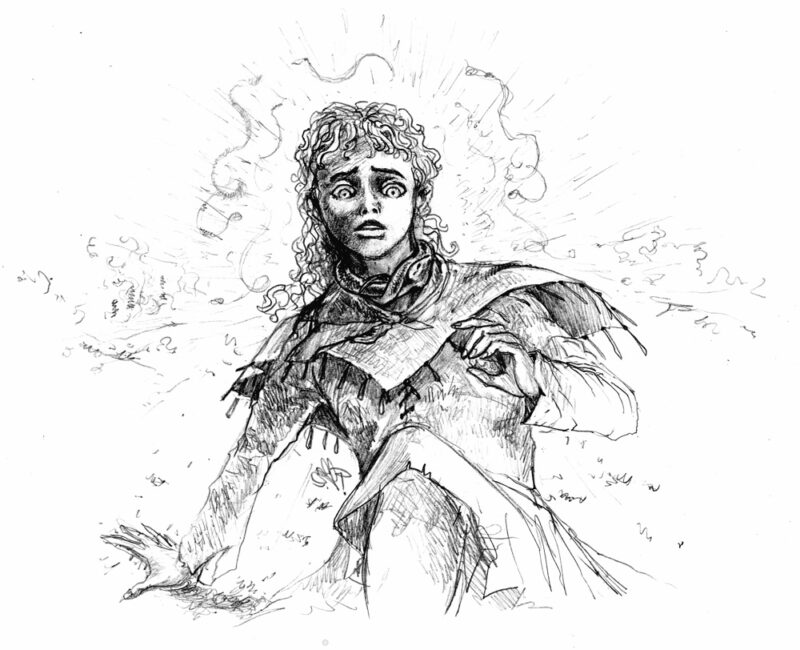 A Shadow in the Dark

If the previous events remained only a series of disrupted images for Senka, then the following moments remained an echo of vague noises utterly drowned in a dark sea of unspeakable horror. How could one describe what was happening in the soul of a twelve-year-old girl who was suddenly without her family, without her home, and without sight? For Senka was suddenly blind!

The girl did not immediately realize her loss of sight. For a moment, she thought that she had simply fainted, as happened from time to time; then she thought that it had somehow quickly become night, that everything had just been a nightmare, and that she was safe and sound in the darkness of her own home, wrapped in a swathe of warm blankets, while her sister slept to her right, warming her body. Darkness? The flame in the fireplace must have gone out. For a while, her mind was fleeing from reality. Then she remembered the house in flames, the blazing fire which she still heard, but could no longer see. She reached out with her hands, desperately hoping to find the softness of her own bed, but her hands only grasped the air, and Senka realized that she was standing. Her nostrils filled again with the overpowering smell of things burning, and she coughed against the smoke. She wanted to turn away, but her legs fell out from under her. She collapsed to her knees, leaning with her hands onto the cold ground, the soil somehow fresh despite the sun and the fire, those warm blazes which she could no longer see. There was something so consoling in this ground beneath her fingers; the thin grass was pleasant to the touch, and Senka, for the first time in her life, simply wished to not exist.

She could not say how long she remained there, kneeling, not thinking about anything, when suddenly by her cheek she felt something soft and wet. Vidra! The dog had leaned his snout against her cheek, licking her, as if he wanted to say that he was still there, and that he was sorry for everything. Her dog. The one thing that remained for her in this world… Senka let out a loud sob and wailed, allowing the horror of all that had happened to pour out in a stream of tears. She cried long and hard, quietly and desperately, stroking her dog’s head, hugging him around the neck and running her hands down his back and coat, remembering the look of her companion, pulling her dog closer and feeling his soft fur underneath her fingers.

This is how Senka felt the hair of her dog raise, and the unmoving body, which she had been holding for how long she could not say, came to life. She felt the push of the dog’s nose at her side and immediately understood: move! Without words, almost silently, Senka lifted and leaned herself against the back of her dog. Her tears were still flowing, but the sense of horror was back. Fear, which had been suppressed by desperation, was beginning to swallow her fully. Senka rose up, holding tightly onto Vidra’s back, as she had done many times before. Now, however, for the first time, that back was her crutch, her strength and her vision. The dog moved forward, and Senka followed; unsteadily and carefully, as if she was just learning to walk. And she learned indeed, both of them learned – the dog began moving more quickly than she could manage, and then slowed down when she nearly fell, adjusting his pace to hers. They had done this before, but it had always been a game. This now was a race for survival, even if Senka was only vaguely aware of it.

One step, and then another. At first, slowly and cautiously, and then a bit faster. Senka trusted Vidra, and her youth allowed her to adapt quickly. The dog felt danger, this she knew. She placed all of her faith in her companion, for there was nothing else left to her, and let the dog’s instincts guide them, hopefully towards some sort of safety. Step by step. Senka had no idea how far they had gone or for how long they had been moving; she remained focused only on the next step. She could not see that darkness was approaching since for her everything was now dark. Even so, she became slowly aware of the change that the dog sensed. A strong grip of bitter cold began to reach her. A coldness which she had never felt before – not the sharp chill of a fresh winter day spent running through the snow with Vidra. No, this coldness was terrible, deathly, indescribable. The closest thing she had felt to this was when, as a child, she had touched the face of her dead midwife, the woman who had taken care of her after her mother had died and told her almost all she knew about her mother, much more than her father ever had; but it was her father who fell upon her after that touch and struck her with his hand, in front of everyone present at the funeral. It was one of the rare occasions that he had used such force on her, and Senka realized and remembered that what she had done was taboo, a forbidden and socially unacceptable thing. But now, this time, it was not she who had reached out and touched the cold – this coldness had reached for her, and closed about her. Stunned and bewildered, Senka collapsed once again. She did not know that they had already arrived at the foot of the forest, and could not have known that the thick shadows of the trees were her only protection against a fatal destiny. Fear compelled her to silence, to bend as closely as she could to the ground, reduced to the panicked desire to disappear before an unseen danger. Yet the danger was much more real than she could have imagined.

Strange sounds began to reach Senka. Something like sniffling and creaking together, terrible sounds that leapt out from the sea of incoming noises, like some immense icy wave approaching. These strange noises overwhelmed the sounds of the fire, eclipsed the songs of birds in the distance, of crickets and flies, of the wind, and any other of the natural sounds of the forest. And then, Senka was at once alone in the dark, in complete silence, save for the unnatural noises. She was encircled by the approaching terror. Perhaps for a moment she fell unconscious, or perhaps not; it was difficult to judge in the constant, humming-filled darkness. Under her right hand, she felt the raised hair of Vidra. Like two shipwrecked sailors, they pressed against one another and as close to the earth as possible, holding firm to the solid ground below them, as if that patch of earth on which they lay was the one island in an endlessly dark sea, the only refuge for life in a deadly, frigid storm.

The sounds came even closer, like waves whipping the shore. Then, they seemed to cease. Senka held her breath as long as she could, trying to be so still that she herself could not hear her own breathing, not knowing whether that horror which they had been hearing was close or away. And then the sounds began to move off and fade. Senka and Vidra lay helplessly for a long while after, remaining so until Senka began to feel the dog’s hair, little by little, relax. Whatever the danger had been, it had, for now, passed.

After what was likely an hour, Senka again raised herself. She had no idea where to go, nor what to do; she could not think clearly about such things, nor about anything else, so she did the same thing that had already saved her once, even if she was not fully aware of it; she gripped onto her dog’s back with one hand, the other grasping about around her, and let Vidra lead them where he would… Far from the danger that, as she felt, was not gone for good.