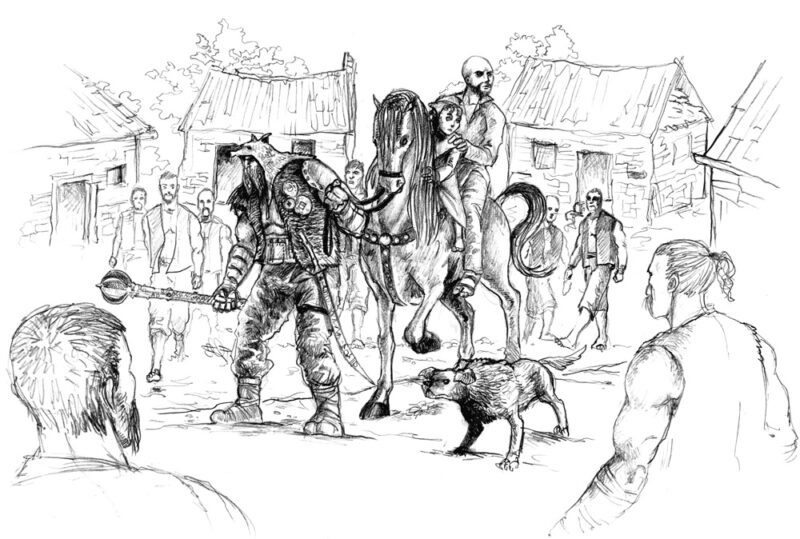 Only now did Senka begin to fathom what the “dead of night” truly meant. Midnight had arrived, and they all felt it. As if everything in the forest had fallen asleep or died: the breeze trailed off, the occasional night cries of birds ceased, even the owls stopped hooting, and even the stream’s steady whisper seemed to hush, so that their wading through water suddenly sounded loud and heavy, as the silence wrapped around them like a shroud. And then, abruptly, the still of the witching hour was broken by a distant howl, a long, drawn out moan from the throat of a lone animal, stretching out and out and out until, finally, another wailing voice returned its call… and then another, and another, again and again, until these outcries of numerous throats had seemingly encircled the forest, pouring out into the night air. It seemed as if this choir of howls was coming from every direction. Luckily, still from a distance.

Žarko halted on the spot once again. Vuk thought that even the decisive warrior no longer knew where to lead them next. They appeared to be surrounded; in her head, Senka imagined a noose of demon wolves slowly tightening around them. Had they indeed fooled the wolves by covering their trail? Or had they simply fooled themselves beyond any chance of escape? Then the leader of the small fugitive party tugged again at the reins of his horse, leading them out of the stream.

Senka, of course, could not see where they were going; nor did Vuk at first grasp what was happening, until he observed something completely unexpected – there, in the middle of the forest, just a stone’s throw from the edge of the creek, stood some small wooden shack! Žarko stepped out of the water and slowly led his horse towards this cabin, while trying to stay in the deeper shade of the tallest trees. The forest here seemed unnaturally bathed in the strong light of the full moon. As they approached the cottage, Vuk saw the outlines of another behind it, and then another, and yet another! Incredible – what was this, a village in the middle of the forest?! When they got closer, they could see that the huts were grouped about the edge of a small forest clearing, just beside which flowed the small stream they had just left. The moonlight now illuminated these cabins clearly. All of them but one were small, humble cottages, thrown together without a great amount of craft or skill, or perhaps just worn down by age, while at the center of the perfect circle that they formed stood a larger and more significant structure, close in size to the burned down house that Senka had once called home. Small forest trees were growing right next to the small huts, their branches protruding from the circle’s outer edges and covering the huts in part. Only around the largest one in the middle, built just as low as all the others, was a small open area, just wide enough for few people to pass. From this circle, miraculously set apart from and yet in the thick of the woods, nothing could be heard to disturb the forest peace. There were no stables, no signs of livestock, poultry or horses, nor anything else characteristic of village life. There was nothing by which one might say that anyone lived there at all – the settlement might have been long deserted.

“What in the devil is this ghost town…” mumbled Žarko into his chest, quietly, eyeing the scene in front of him. They stood on the edge of the clearing, looking through a small gap between two of the cabins, and, as far as they could see to the left and right of themselves, there was not a single path leading through the woods to this abandoned place. It was as if some demon had snatched up a handful of huts from somewhere and planted them right here in the middle of the forest. Vuk shuddered from a sudden, unexpected chill and felt a desire to turn back to the stream from which they had just come, to move away from this place as soon as possible, but Žarko, for reasons unclear, stepped bravely forward. He cautiously led the horse through the narrow space, advancing towards the wooden hut at the center. Strange was this unlikely procession made up of a burly man leading a horse with a blind girl and lame thief, trailed by a silently walking dog. And thus the small party wandered into Morlak.

Nothing happened as they stepped slowly forward. There were no threatening signs that might signal an ambush as they went out onto the small open space in front of the central building. They found themselves near the entrance to the larger hut – only later would Vuk realize this was always the case, no matter which direction one entered the round village from – and Žarko led them straight towards the door. He seemed almost entranced, offering no explanations or indications of his actions, though perhaps he only wished to not break the odd, absolute silence of the place. Step by step, he approached the entrance, lit up by the light of the moon. They were just a few short steps away from the door, when the village awoke!

It happened so incredibly quickly, and yet at the same time completely naturally, that it seemed as if there was nothing unusual about it. The door in front of them opened without a sound, and at the door stood a figure lit up from the back by firelight coming from within. And where, just a moment before, there was a musty darkness lit only by moonlight and enshrouded in a deep silence, there was now the vibrant blaze of numerous hearths and the pleasantly muffled murmur of a living settlement. Vuk could not unriddle how it had happened – the hearths could not have begun glowing all at once, together and suddenly, yet he was sure that there had not been even a single fire lit as they moved through the small passage between the huts. Now, however, a little light was gleaming out from every single hut, glimmering beneath the doors or through a few small window panes.

The figure before them stood motionlessly, its face remaining in the darkness, but the light from behind clearly outlined a large figure – an imposing man, bearded, and almost as great in stature as Žarko. And he just stood there, staring fixedly at them. Vuk noticed uneasily that the doors of all the other huts he could see had opened, and before each one there was now someone standing. All these doors were facing the center of the circle and the larger dwelling in front of them. They were surrounded and lost, while all the eyes of the village were focused on the strangers. Then, slowly, the villagers began approaching. There was nothing threatening in their movement; the horse and the dog could sense this, and they showed no sign of uneasiness. And so the fugitives were suddenly surrounded by people who were looking at them curiously. The only one who did not approach was the man at the door of the largest building, but they were already within his reach; then, as if he had been waiting for the others to gather round, he spoke out. He had a deep masculine voice, rough but at the same time inexpressibly pleasant: “I welcome you, travellers, to Morlak! Rare is the opportunity to host passers-by in our little village. Dismount and come inside, for it is time to feast!”

As could be expected, Žarko was the first to bounce back into senses, while Senka and Vuk were still completely confused: “Dear host, thank you, may goodness befall you! We would gladly eat and drink, but now is not the time; trouble is upon us, we are being hounded…”

“Put your worries aside, hero,” the large man at the door interrupted Žarko. “Here time flows differently than the stream you stepped out of. So come on in, dear guests, make yourself comfortable, and let us celebrate. There is time.” And with these words, the man turned around and vanished back through the doorway from which he had appeared.

It was a privilege having you here, on my site.