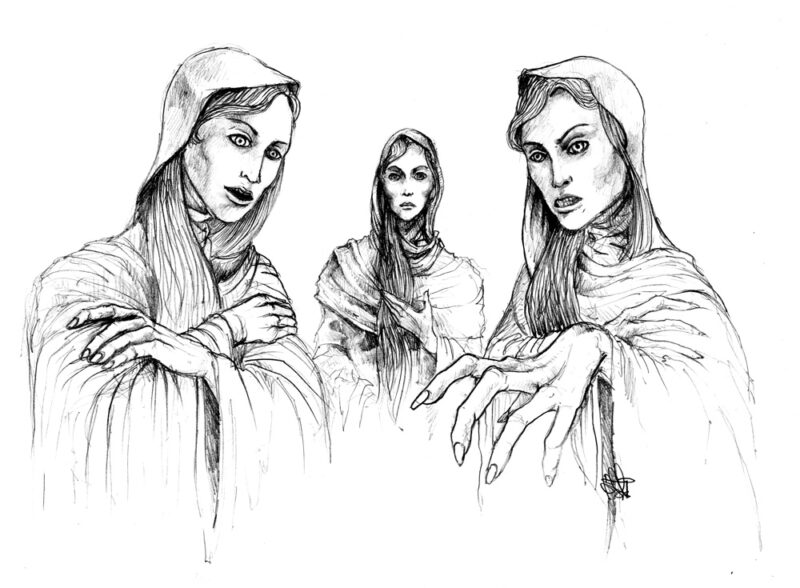 To nameless bards and storytellers whose words have been my guideposts.

No tree, it is said, can grow to heaven unless its roots reach the darkest depths.
C. G. Jung, “Aion”

There are many mythical beings in this book that are unknown in English and most other languages. It was a great endeavor to make them all conceivable. A good example is dragon, as there are three types: the fiery dragon is a huge reptile with wings, a being that carries a fire inside him, as known in English. But, there is also a human form that is his descendant and ascendant, a human with great power, usually called dragonkin, some of which can even shapeshift into a dragon-like form and fly. The third form is the spirit dragon, the most unusual and most powerful of them all – this invisible essence willingly resides only in a special human, called a zduhač, who is unable to control it, and it is the only being that is able to confront ala, the ancient beast that brings havoc upon men; when ala strikes, the spirit dragon leaves its transient vessel, the body of the zduhač, to fight its archenemy in the sky. The reader should not be confused when any of these three forms of dragon (fiery dragon, dragonkin, or spirit dragon) are referred to simply as: dragon. In general, all mythical beings are explained through tales or dialogues before or after they first appear.

On spelling: When a double-sign is used up above the letter in the folklore-spelling of names and titles, like zduhač mentioned above, a reader need to imagine “h” after that character and read these two letters as a single hard voice they become. Therefore, Miloš is Milosh, Baš Čelik is pronounced as Bash Chelik, and Žarko reads as Zharko (similar beginning as French gendarme or the voice “s” in measure). In contrast, a single line above the letter, like in Perunović, means the softer version of the same voice, like the “ch” in chirping of birds, or the soft opening sound of ciao in Italian, pronounced with tongue touching the front teeth.

On strange namings: The men of Morlak call themselves Morlaks, though most outlanders would likely call them Morlakians. This chronicle tries its best to respect the locals’ ways.

The woman beside the stream was visibly worried. Her old, wrinkled face, worn beyond her years, looked weary as she pulled a few pebbles from the bottom of the stream and tossed them into her wooden trough. Despite doing everything in her power, the young, cared-for woman who had recently given birth was not getting any better. Though the red thread tied around the newborn’s hand had seemengly helped the baby, the red wool she had tucked behind the ear of the young woman had not helped her recover. And nothing else she had tried had helped the new mother either. Not the garlic hung at the door, nor the stones taken from flowing water, brimming with spirits, which she had each day tossed into the trough after washing the mother’s and newborn’s clothes. Nor had it helped that, from the time she had given birth, neither the mother nor the child had left the house. Not even that the worried father, at the old woman’s insistence, had refused to carry embers from the hearth to rekindle a fire for the nearest neighbour, who had just returned to his lot after being away on trade for several days; no, during those first, perilous days, when various demons lurked before the house, waiting for any opportunity to prey on the mother and newborn, the living fire must not be taken out of the home’s heart.

“At least everything seems all right with the child now,” she thought. Many of the protective measures she had carried out had been for the sake of the child, and at least these had shown some success. The woman glanced up at the sky for a moment; evening was approaching and she would have to hurry to bring the freshly washed garments of the two unprotected souls back home before darkness set in. She shivered briefly at the very thought of what might happen if the swaddling cloths were to be left outside overnight… No, they had already been through enough misfortune.

“Tonight is the third night,” thought the woman as she hastened toward the house. “Everything ought to be resolved tonight, for better or worse.” Earlier she had already set out the table inside, with bread, cheese, honey, and even a glass of wine against which she had leaned a silver coin. The offerings were, therefore, ready. As soon as she entered the house, the old woman dressed the child in the father’s white shirt and then woke up the mother, who was hovering between dream and reality, still in the grip of the fever that had not left her. Tonight, even this tormented woman, especially this woman, had to stay awake. The future of her newborn child might very well depend on it.

The mother twitched restlessly. She had fallen asleep! Suddenly she opened her eyes in a panic and took in the scene in front of her – beside the cradle, roughly hewn out of a large chunk of wood, stood three women wearing long white flowing dresses. The Fates! Oh Gods! The triad was already here?! How could she have fallen asleep, how could she have let herself, before their arrival?! The three strikingly similar women were poised one next to the other, staring down at the cradle from which the child – or was it just the mother’s imagination – returned their gaze with wide-open eyes, completely calmly and quietly. Despite the similarity in the women, the mother had a sense that they were in fact different ages. She wanted to say something to them, to excuse herself, but the guests behaved as if she wasn’t even there. And just then, the one who appeared the oldest spoke.

To lose everything, and remain apart, darkness always round her, darkness in her heart! The oldest woman uttered these words with a note of pure malice in her voice, continuing to gaze down directly at the child.

The mother burst out in muffled sobbing with a cry, “No, no, no…” In that terrible instant she was certain that she, because of her negligence, was solely guilty for such a fate. Her child had not been safeguarded through a third night! After a significant lull, the oldest woman turned away from the child, and the middle one began to speak.

To wander the world, without peace or cheer, shadow ever pursuing, and escape nowhere! The voice of the second woman was like the first – perhaps less malevolent, but equally ruthless. The mother was now openly weeping, her heart pierced by these sudden arrows of despair. “No, nooo!” she screamed, but the three women in white continued to disregard her. Just as she herself failed to notice neither the aged hand of the woman wiping her hot face with a wet cloth, nor the worried faces around her. The young mother’s ravings were disturbing to the caring old woman and the man who stood off to the side, unsure of what he should do. In the meantime, in the same place, which now seemed as if it belonged to another world, the second woman also turned away from the child in the cradle.

Then the youngest and most beautiful of the three women spoke up; her voice echoed with a certain care and gentleness that was lacking from the similar, yet distantly cold voices of the elder two. As opposed to them, this youngest woman addressed the child directly, and her words resounded like a lullaby; and truly, the child fell asleep without a sound just as the woman voiced her final words.

Young girl, endure, evil takes its toll, through it all you will emerge with naught, yet pure in soul. And though shadow may threaten all that you hold dear, it cannot possess you, nor the beauty that you bear… At the end of your dark journey you still will feel the light; out of shadows, a whole empire, kingdom beyond sight.

Having uttered these final words, the third woman also turned away, and thee three departed without a single step.

The young mother was now raving incoherently, losing herself often, again and again, and to the old caregiver woman it was becoming clear that perhaps, by the will of those who decide our miserable fates, which we struggle against, this tormented soul might not make it through the night. “No… thank you… my thanks… Senka!* Senka… beauty… evil! Evil threatens!” Then there followed a string of disconnected words which neither the old woman nor the worried husband could make sense of. Unfortunately, these words were also her last. As the final fragments foundered from her tongue, her spirit gave way, leaving the newborn child to the mercy of the cruel fate bestowed upon her, and the father to struggle on alone in the world. She had passed, as it had been fated so, and from fate one cannot escape…

With tears brimming in his eyes, which he managed to control only with great effort, the father broke the deathly silence that had seized this home: “My love, go in peace. I shall care for our Senka more than for myself.” The aged woman turned to him with surprise, “But the godfather, he has yet to choose a name…” and then she fell silent. The man’s look said it all. “The child will be called Senka. That was her mother’s dying wish.”

(*In traditional folklore, the female name Senka has the same meaning as the word shadow, and remains in usage, though infrequently, as a name today.)