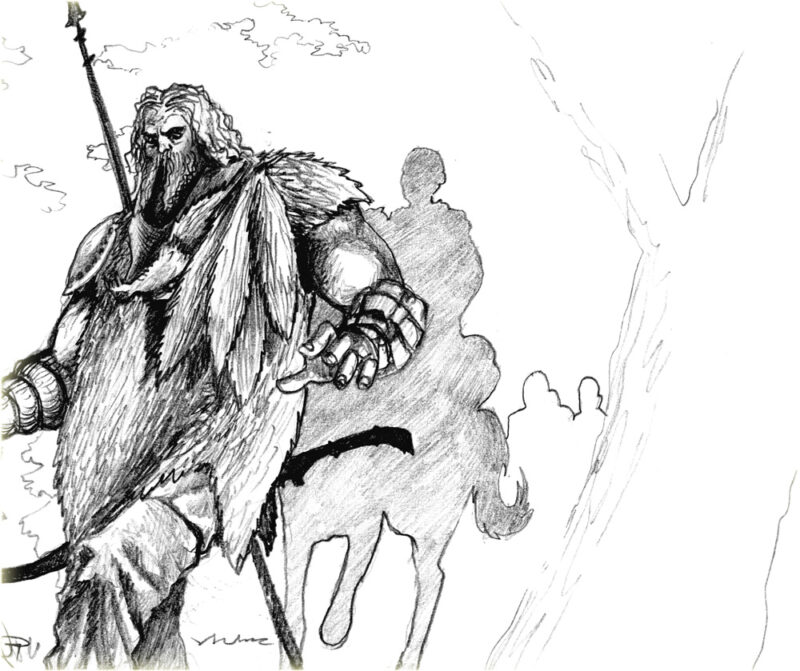 The party left Morlak with two new companions: the bearded innkeeper, who revealed that his name was Brado, and another man from the village, Vukan, who was somewhat shorter and slimmer than the other villagers, but who had journeyed most often to the shepherds. He said this as if it was worthy of praise. Their guides remained barefoot even on this trek; without making a sound, they pressed gently across the forest floor, with steps as light as falling leaves. As they were departing, Vuk turned to look once more upon the strange village they were leaving behind. He was not surprised to see that the huts were once again shrouded in darkness, dimly lit only by the light of the full moon. He somehow expected it. All the men from the tavern, who had gathered on the edge of the village to bid them farewell, faded from sight, and not a hint of light could be seen from any of the huts.

So the column of travelers, now a few unshod figures longer, moved on. In front walked Vukan, the youngest of the Morlak men (or at least Vuk believed so), and behind him Žarko, who led the horse on which Senka and Vuk sat again, while Vidra followed along gracefully in their footsteps; fully at the rear was Brado, covering their tracks and removing any signs of their passing. The two Morlaks regarded this as necessary, since the group could no longer follow the stream that had helped to obscure their traces – the mountain to which they were heading was in a completely different direction. Brado assured them that he would erase their tracks to such a degree that after a few hours even wolves would not be able to follow them. For this purpose he used some shrubs, torn from their roots, which according to him were so strongly aromatic that in a short time the plants’ fragrance would completely overwhelm any scent they left behind. He used these bushes to vigorously strike the ground here and there, along the route they walked, as if sweeping away with a broom some paths they traversed, while leaving others untouched, for reasons only his own. Yet, as no one else was well versed in erasing tracks, they were left to trust his methods.

When they drew away from the village, the silence of the night greeted them again, confirming what the Morlak men had spoken: outside the village it was still the dead of night, which had just begun. There were still many long hours until morning. Vuk marveled, however, over their feeling of being completely rested. Even though they had only managed to fortify themselves with food and drink, over just a few hours of sitting on relatively unforgiving wooden stools, he felt as if they were starting off after several nights of sleep. Vuk tapped Senka to ask, in a whisper, if she felt the same, and she was well rested too; there was indeed something very strange about the time in that village – still they could do nothing else but accept this as merely one of the many oddities that had befallen them these past days.

The two Morlaks estimated they would reach the mountain halfway through what remained of the night. And so it was: nothing unexpectedly dangerous occurred during their quiet venture forth, though danger was always looming above. They would now and again halt in the shadows of overhanging branches to hide from the view of the flying horde which continued to fly above the forest, searching for them, but they always managed to succeed, or so it seemed, in anticipating the arrival of the dusk imps by that characteristic unpleasant humming babble of shrieks and flaps. At one point, the imps flew so close that, from the shadows, fugitives could make out the flickering shine of the fires which sometimes burst from their mouths, lighting up just for an instant their sharp teeth and small yet foul bodies. They truly were a terrifying sight, even apart from the rest of the hellish retinue. As for the bloodthirsty howling, they heard it several more times, but each time it sounded further and further away. It looked as if they were indeed outwitting their tireless pursuers.

After a long and practically uninterrupted striding at a swift pace, during which they attempted to stay quiet, Vukan finally halted and turned to the others: “Just a bit ahead, and we arrive at the shepherd camp. It would be best if you come to the front now, and we will follow. And say nothing to the herders about our village. Tell them, Žarko, that we are all your servants. Seek escort to at least the edge of the forest, and see that you get it, and we will come along with you as far as we can.” Without waiting for an answer, the smaller man went to the back of the column to join Brado. Žarko pulled on the loose reins of his horse, stepping forward, and thus they arrived at the foot of the mountain.

Vukan had led them to the right spot. As soon as they stepped past some thinning trees and out of the forest surrounding the mountain, a shepherd’s camp appeared before them. It was impossible not to see it – unlike themselves, it was clear that the herdsmen were not hiding from anything. And why would they? It was a well-organized group of about thirty or so men that sat around a large, blazing fire placed in the center of the camp. Someone was speaking something obviously humorous, since the others frequently interrupted him with bursts of laughter. A good distance from the fire stood a single large tree, on whose branches the shepherds had things out to dry; several cloaks, shirts, and pants were hung about on all sides. Two shepherds were leaning against the tree, while the third one, likely serving as the lookout, was situated on some improvised platform in the tree branches; it was clear that they expected no danger, as this sentry was laughing along with the others, without ever taking his eyes off of the merry gang around the fire. Near the fire, several large tents were also set up, all of which were glowing dimly – apparently, there were fires lit inside as well, or at least some kind of torch or candle must have been kept burning in each. The tents were arranged in a closed semi-circular formation towards the woods, acting as a barrier before the mountain and a fence towards the clearing where an enormous herd of sheep lay in the grass, encircled by many dogs far larger than Vidra. By Žarko’s quick estimation under the moonlight, the dogs seemed to vastly outnumber the shepherds, and many of them were awake, though only lazily watching the sheep. Their purpose now seemed more to guard the sheep from wandering away than from any approaching danger, as any significant threat for such a large group was unlikely. The dogs were certainly bred to be sheepdogs, and serious ones at that, concluded the warrior, who assumed that they likely even slept in shifts, just as watchmen would.

Taking all of this in, Žarko continued to advance his ragamuffin group towards the campfire. He had no intention to hide their arrival, but they did remain quiet. The herdsmen were so caught up in the entertaining story being told that the strange column had crossed nearly half the distance from the forest before they were noticed. First off, one of the closer dogs straightened his head, raising its ears and turning in the direction of the arriving party, then barked loudly. When the other dogs started baying as well, the watchman in the tree finally remembered his duty, raising his eyes to see what had set the dogs to barking. It was time for the newcomers to make themselves announced.