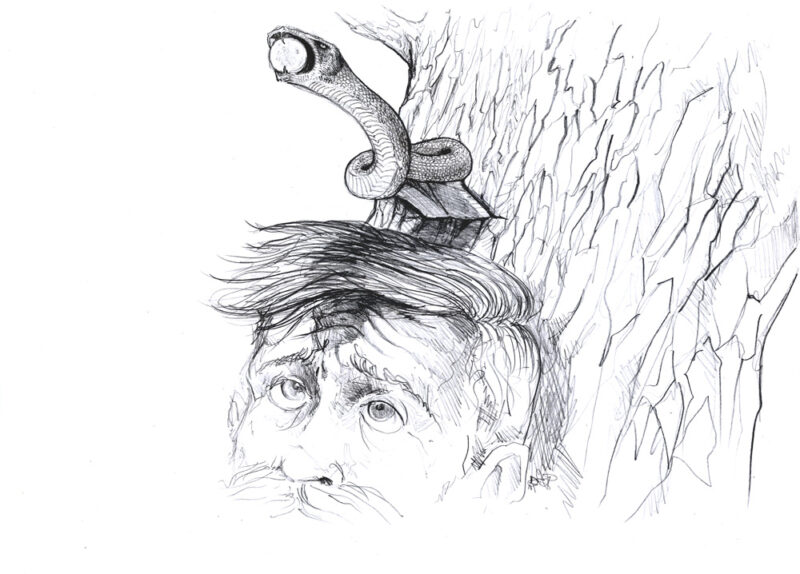 “Ahoy, herdsmen! May god grant you health!” shouted Žarko, loudly, but trying to refrain from being too loud, for he knew all the while that at any moment the scouting flying horde could be near. The noise around the fire died instantly and several of the men stood up and turned about to face them, while the rest remained sitting as they were by the fire, caught by surprise, cautiously peering out in the direction of the advancing bunch. Most of the herdsmen were unarmed, though some had knives hanging out of their belts, but all of them had their shepherd’s crooks at hand; those who now stood leaned onto these sticks, each with a tip curved like a hook, and it was clear that they were useful for a number of things beyond catching of sheep, and would make a good enough weapon in a pinch. None of the men responded to the greeting, so Žarko yelled out once more: “So is this the way that guests are greeted in a shepherds’ camp?” To this finally came a reply from the man who had until that moment been holding court with his entertaining story: “Gods be with you, unknown travelers! What fortune leads you to us?”

“Not fortune, but misfortune, shepherds… wait a moment till we reach the fire and I will tell you of it!”

And soon the party found itself in the heart of the shepherds’ camp. There was no time for pleasantries – the travelers refused food and drink, as well as to sit by the fire. Instead, they stood among the herdsmen, while Žarko narrated a shortened version of their story. This time there was no wine, so his sense of restraint had returned; he told them that they were being pursued by bandits, from whom they escaped to the forest only to become lost. And now here they were, his sister and servants, seeking help, seeking someone to guide them out of the woods. It did not appear that his story was particularly persuasive, as no immediate offers of help came forward. Perhaps shepherds were afraid of the bandits mentioned, or of the newcomers themselves, especially this giant of a man who spoke confidently of their troubles, but looked as if he had sent a good many to their ends himself. The shepherd who greeted them first was again the one to finally speak: “Yes, that is trouble, but we are not much of a help: each of us has his own obligations, and many are the sheep to watch over, we cannot spare even a single man…” But Žarko was not so easily dissuaded: “Shepherds, it is not the way, nor does it look well, to refuse help to a guest in need! And we need a guide to take us only to the forest’s edge. Out of many, surely there is one man you could spare now, and that for a short while?!”

No, responded the shepherd, again answering similarly. They could spare no one, all of them must watch over the sheep. Little by little, anger at this unpleasantry had begun to overwhelm Žarko. And his patience did not need much to reach its end. He suddenly pulled a knife seemingly out of nowhere and threw it powerfully in the direction of the lone tree before anyone could react. Not a blink later, the blade, which had been hidden unseen in Žarko’s belt-sheath, was now stuck deep in the tree trunk, just above the head of one of the men sitting under the tree. The terrified man looked up at the blade that was barely sticking out, as if swallowed by the old tree trunk, while Žarko roared in a thunderous voice: “Hear this, shepherds, from your guest in distress! The one who brings me back my knife does not have to travel with Žarko. And so help me God almighty, if none of you can, then you will all accompany us!” Silence followed. Vuk, who was still seated on the horse, could feel goosebumps rising up his spine in response. And he was in Žarko’s party! He could only imagine how the herdsmen must have been feeling at that moment.

The stupefied group, mostly young lads, now found themselves truly in trouble. They looked at each other, but no one would speak a word. The one above whose head the knife had sung ventured first to pull it out – but he could not budge it even a hairbreadth. Then another sitting alongside pushed him away and tried, but with the same result – as if they were trying to pull the tree up by the roots. Two more shepherds tried, apparently known for their strength, but again to no avail. Then the man who had first spoken started to plead desperately, on the verge of panicked tears, realizing the situation he had put his fellows in: “Please, do not be like that, warrior, all gods be with you. I do not speak what I think, only what has been commanded to me; duties are determined by our chieftain, and we shepherds must obey!”

“Then where is this chieftain of yours? I have something to ask him!” thundered Žarko, so loudly it made even Senka and Vuk uncomfortable. Their protector was indeed strange in his ways, yet it was certainly better to be on his side of things. The pleading man answered in a quivering voice: “The chief is in his tent, that largest one, there. Maybe resting, or reading over a letter which arrived today from far away…”

The man had not yet finished speaking when, off to the right, came a voice, resonant and powerful, yet at the same time graceful and pleasant to the ear: “Here is the shepherd chief you seek, O warrior of an ancient ilk! Do not frighten my young shepherds so, rather tell me what is it you need.” While saying this, the man was at the same time quickly heading for the lone tree, which he stopped in front of, and, with what looked like ease, pulled the knife out of the thick of the tree trunk. Then he turned and brought the knife to Žarko, holding the blade while offering the handgrip to its large owner, saying: “A good knife for a good warrior… better I have never seen!” The sudden change in the situation surprised everyone, including Žarko. Who was this vigorous man who could so easily pull the knife from the huge tree, the blade thrust in so deeply? He was dressed simply, just as the other shepherds, but larger, almost as massive as Žarko. He had a beautiful face, almost feminine, yet still manfully handsome, and an even more dashing stature, which not even his cumbersome cloak could hide – he was simply a pleasure to both look at and listen to.

Žarko accepted the knife by the handle, still thinking over what exactly to say (he was a bit confused by the final words of the chieftain – that ambiguous praise made unclear whether it was the knife he was admiring, or the warrior who carried it), when the man again spoke in his bell-clear voice: “I heard you rightly from the start, unknown warrior, but did not leave my tent right away as I was reading a small missive that came from afar. Though the letter is small, its trouble is large! By the will of gods, it seems, our paths are united – I as well must pass the forest, and do so as soon as I can. It will be my pleasure to guide you and make the journey with such an ally!”

Žarko was immediately pleased by what he heard, and so even answered quite politely, trying to emulate the refined style of the previous speaker: “Thank you, chieftain, for your help in time of trouble. Though you spend your time with sheep, you speak wisely, and act even more so; your manners would not shame me were we to stand before our king and his whole court! But tell me, if it be your will, how are you called, chieftain? By what name may Žarko call his brother in arms?”

“For my shepherd brotherhood here, I am Chieftain Miloš, but to you and whole your party, I will just be Miloš, brother, your fellow companion!”

And next, to the astonishment of all, the two men embraced brotherly. “At first sight,” thought Vuk ironically, while all of them felt relieved that the unpleasant situation ended well. Fraternity had been offered, and accepted, making brethren out of the two possible opponents. The herdsmen began to cheer, and everyone relaxed. Miloš stepped back from Žarko, saying that he must bid farewell to his shepherds and issue them orders, after which they could immediately set forth upon their journey. And that is how it was – just a short while later, the strange bunch again ventured off into the forest, this time counting one more amongst its members, the one who should be their guide to safer pastures.