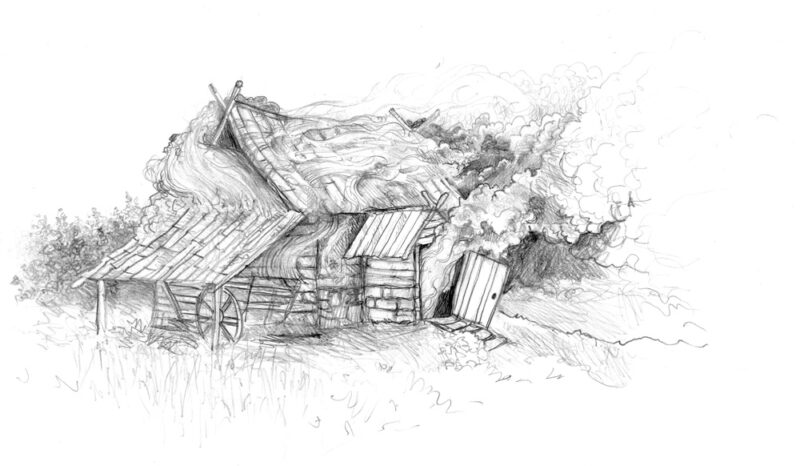 The Flames of Change

The scurry through the woods, that followed immediately, Senka would remember as only a blur of incomplete images; several scratches from thorns and branches, a slight tear in the sleeve of her white shirt, her scarf snared by a low stick that dragged it off her head, leaving it hanging from the knotted braid underneath her disheveled hair as she ran on in a panic. Her dog racing by her side, his ears constantly pricked up and his head unnaturally raised, as if any moment they would come across something terrible. An awareness of her right hand pulling back the greenish scarf to the top of her scalp, her left arm reaching for a moment to help, and in this moment the feeling that the empty skin for water was weighing on her more than it ever had before when full. The instant when, breathless, but too frightened to notice her breathlessness, she stopped upon the exit from the forest and, in front of her, saw all that her family possessed. The small field her father toiled over everyday, and the path that led through the field to a small low house made up of a single large room where she had spent most of her life, with its floor of well-pressed earth and hearth in the middle. The moment in which the empty waterskin just dropped from her hand. The next moment in which she again began to run, this time directly to the raging fire devouring what just a short hour before she had called home.

The flame had already engulfed the wooden roof, underneath which lay stores of straw to hold the house’s warmth during the cold nights. No one was there to put out the fire; no one was in front of the house. Suprisingly clearheaded, Senka remembered the three large straw mattresses; one on which her father and stepmother slept, another which she shared with her sister, and a third one which was generally empty, intended for expected and unexpected guests alike, who could always assume, as was fitting, that they would be welcomed with hospitality. The wooden table, the wood chairs, stacks of firewood, linen curtains in wooden frames that served in place of walls… their home had been an unlit torch which was now ignited. But, how? To Senka it seemed that, along with the wooden walls, the flame was consuming even the stone foundations which had measured her growing up (the day when she had realized that the stones no longer reached even up to her waist she still remembered fondly); maybe the flames were licking at the old straw, mixed with mud, which had been pushed into the cracks between rocks to keep the weather outside? Or maybe that was just the impression made on her by the fire which now pulsed everywhere through the window frames, those familiar frames small enough so that not too much heat would escape when the wooden shutters were closed, yet large enough to let daylight into the house. A house which was no more.

Senka tried to rush through the door, but was stopped by the heat and the sharp tongues of the flame. The interior of the house looked like a fireplace ablaze – from the intense glow one could no longer see what the fire was feeding upon. The brightness of the blaze forced her to squint and flinch, falling back, her nostrils filled with hot smoke and her eyes with tears. Unaware of her actions, she instinctively ran around the house, trying to look through the window holes, to glimpse anything other than the fiery whips she had faced at the door. But the flames were everywhere, and only flames. Senka realized that she was crying, but she did not know if this was merely because of the fire and smoke. Inside her, she felt nothing but horror: when she went for water, all had been at home. Her father, stepmother, and sister. She could still clearly see them when she closed her eyes, as if they were still inside the house, somehow mysteriously frozen in a frame of fire: her father sitting at the table, on a long bench that wobbled slightly, after a laborious morning in the fields, drinking from a small wooden cup filled from a similarly rustic jug scratched by years and hands and falls; her stepmother preparing some meal in the small pot hanging above the fireplace, whose color on the bottom had completely worn away; and her sister… Her sister! Panic seized Senka in its cold hands. A chill shivered through her body despite the heat thrown off by the house enveloped in flames. Where are they?

Through her unconscious sobs and cries as she was helplessly running around the house in broken circles, suddenly it seemed to Senka that she heard a muffled shout: “Help!” It was uttered by an unrecognizable voice partially lost in the noise of the crackling wood splintering in the fire. She bounded back to the doorframe and pressed as close she could to the open door. The door itself was as well on fire, even though it still hung firmly, though now pointlessly, to its hinges, rocking back and forth under the pressure of the billowing smoke as the flames went in and out. But behind the door, Senka could finally see that the fire had not yet engulfed the whole hut: just beyond the house threshold, whose wooden beams were also burning, there was a small piece of beaten earth which the fire had not managed to consume. And on that island in a sea of flames lay a snake.

“The House-guardian!” thought Senka immediately. She knew, of course, the story of the snake that watched over the house, ensuring good fortune to the household; she knew that it lived under the house foundations, and that one should never hurt this creature. She had heard all of this, but had never thought about it much; she had never seen such a snake, and neither had her father, though it was he who had spoken of it, saying that it was not at all a bad thing that they had never seen the snake, since its appearance would be an ill omen. Her father could not even describe the snake to her: was it large or small, colorful or not, dangerous or harmless? How had the snake come to live here, what did it eat?… In a world overflowing with visible wonders, Senka never thought too much of the invisible. However, knowing this story, she was now certain of what lay before her.

Without a moment’s hesitation, Senka turned and ran to the edge of the field, where her father usually stacked together small piles of hay with a long-handled wooden pitchfork. Senka grabbed the tool and ran back to the house, lowering the spikes of the fork to the ground in front of the snake, pushing it forward through the flames while simultaneously raising her arms as best she could, so that the long handle remained as far as possible from the range of the licking flames. As if by command, the snake immediately crawled onto the pitchfork, quickly wrapped itself around the handle, and with almost unbelievable deftness began slithering upward. Senka lifted the tool and pulled it out of the fire, taking a few steps back from the hungering flame, when she realized with terror that the snake had already managed to reach the top of the handle. Now it had crossed onto her hand! Senka threw down the pitchfork quickly, but too late – the snake had wound itself around her arm! In a flash, she saw the flick of a hornlike tail as it whipped through the air before firmly grasping her wrist, continuing to spiral upwards with the rest of its body, and in the next moment she felt the cold scaly skin of the snake at her throat. Senka shook her head forcefully, but again in vain, for the snake was already wrapped around her neck. The snake’s tail now passed over her eyes, touching them as she blinked!

“I save you, and this is your thanks?” Senka murmured in tearful voice, frozen in fear. In a sudden instance of dread, she was sure that the snake was going to strangle her. She lifted her arms in an attempt to tear off the intruder wrapped around her neck, but beneath her fingers, instead of the cold and scaly skin of the snake, she felt the even colder touch of unmoving metal. It had the smoothness of silk, a feel she knew well, having had the chance to touch this delicate fiber often, on the threading of her shawl, despite the meager means of her family. Then, through her confusion, it seemed to her that she heard a rasping, sinuous whisper, as if spoken directly into her ear: “To reccceive, you mussst lose. All are dead. Essscape. If they have not found you, they have sssensssed you. Essscape.” It seemed then that the fire dimmed and faded, and around Senka, all fell into darkness.