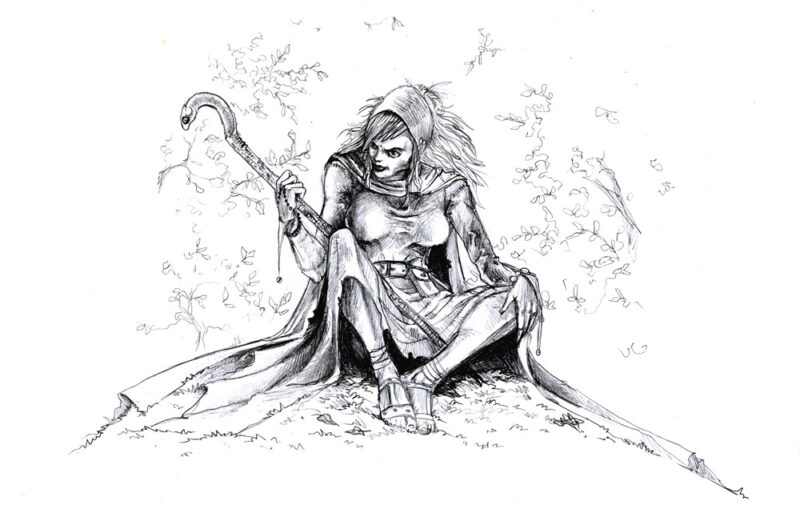 And this awkward column was proceeding just so when it came across the maiden. There she was, sitting on a slight rise in the ground, right in the middle of the imaginary path they intended to follow. As if she was waiting for them. They saw her from afar, and she had seen them too, yet she still did not move in the slightest, nor show any worry or surprise. She just continued to sit, watching as they approached with their ungainly footsteps.

A maiden in the middle of the forest. She was quite a young woman, likely not more than twice the age of Senka. Yet the full bloom of her womanhood could not be hidden even under the shabby mantle she wore – and she was indeed dressed like some old woman: all in black, in a long simple dress of the most basic stitching that reached her ankles, but seemed constricting in its upper sections, visibly emphasizing even further the generous curve of her bosom; hanging over her shoulders was a long black cloak sloping all the way down to the ground, if not even dragging along the forest floor – it now fell in soft folds all around her upon the slight mound where she sat. A dark scarf partly concealed her lush and wild hair, but waves of it billowed out on all sides, spilling over her back and chest. Across her knee she held a wooden staff, long like the shepherd’s crook on which Miloš now leaned, yet finer, and carved for its entire length, curving at the top like a snake, with red stones inlaid like eyes on both sides. But most striking of all were her eyes: cheerful and mocking, they shifted ceaselessly from one traveler to another, and while they were approaching it was obvious that she was ridiculing them without a single spoken word. The travelers themselves were so surprised by this unlikely encounter in the forest that they had not shared a word with each other either – they just stared as if bewitched at this apparition of a girl in front of them, continuing to advance towards her, so that Senka remained unaware of this new presence until the maiden herself spoke up when they came very close:

“I have yet to see such a bunch! From a buffoon to a loony, a shepherd for wolves, the blind, and the lame.”

As a response, she was greeted by complete silence. Even the ever-ready warriors at the front of the column seemed surprised by the girl’s audacity. Vuk once again felt the ever more frequent creep of goosebumps up his back, followed by uneasiness; how could she know that he was a cripple if he was sitting on the back of a horse? And how could she know his name, if in mentioning wolves she had really meant him? That was possible, as his name was the same as for any wolf in these woods! It was somewhat obvious to assume that Miloš was a shepherd, but then again… how could she have guessed that Senka was blind? The young girl always had her eyes open and her gaze on the ground, as if she was constantly ashamed, so that even Vuk did not immediately recognize her blindness when they first met. Or perhaps the young woman had thought of them differently – the “lame” could just as well mean Žarko and Miloš, as they were limping with their shoes on the wrong feet…

“What is with you, unsung heroes? Should I speak backwards so that you might understand? Shall I turn around so you can see me?”

“I know not who you are, little piss-ant wench, but nobody talks like that to Žarko!” roared the giant, stepping towards her, but Miloš held him back: “Hold on a moment, brother! Surely you do not mean to beat a girl? Yes, it would be easy with arms, but let us try first with words…” Žarko stopped at Miloš’s prudent comments, but the girl continued as if she had no intention of relenting with her provocations.

“And thus speaks the great and the wise Miloš… it is my honor to meet you, O chief of the shepherds. And what caused you to split from your sheep? Have you, like your ewes, decided to follow the most headstrong ram of them all?”

Now it was Miloš’s turn to be offended, yet he instead answered in a calm voice, bell-like as always, but now with a noticeable dose of sarcasm, on par with girl’s own: “My brother here might be like a ram, yes, a battering ram that breaks things. And no sheep can outrun his horns, girl, so think closely what you say hereafter – I have held Žarko back once, but I shall not do so again! Now tell me forthwith – how is it that you know of me?”

These words seemed to shatter the young woman’s desire for further conflict. Abruptly, her voice gained a depth well beyond her years, at the same time ridding itself of any hint of sarcasm.

“I know about you, Miloš, that is true. And I know about the others, too: I know of the hero Žarko, of the cripple Vuk, of the blind girl Senka and of her dog Vidra. I know even of the two barefoots at the rear, and much more than you do, or any other member of your fellowship. But where do I know this from, that I am not going to say! It is up to you as to whether will you trust me, for I wish to travel with you.” Just like that, she had laid it all – and all of them – bare. An almost tangible confusion now seized the pack of travelers. Who was this girl who knew their names, and beyond that, she now even wished to join them?!

“Hold it right there, mad-headed woman! To our questions you answer with secrets, and you want our trust? Why accept such a stranger into our companionship? You could be a spy or a scoundrel, or even a witch – such knowledge as you possess does not come to just anyone.”

After Miloš spoke these words, silence followed, while the two disputants held each other’s eyes, unblinking. Miloš had said all he had in that clear, calm, bell-like voice, lowering the tension just as the young woman herself, but still the weight of his insinuations reached the heart of each of his companions. It appeared that the woman was also aware of this, and that she was stewing over how to respond, though her face showed no sign of emotion. After a tense, overlong moment, she spoke once more.

“You are indeed wise, shepherd Miloš, even wiser than they say. Not a witch, that I am not – yet. But I am indeed a mora; daughter of the greatest witch of them all. And though I have not yet assumed the powers that await me in my womanly maturity, I am capable of seeing things that neither you nor others can; so you all should listen to what I am about to say: your fellowship is not unforeseen. It has not come together by chance. Each of you have a quest, bestowed upon you by the gods themselves. Some of you hide yours willingly, while others know not yet what theirs are. And I have my own to fulfill: to see all your quests accomplished. About all of you I have dreamt for years… now we meet and I have revealed myself, though I could have used deception to enter your party. Think over this further if you must, for I shall say no more – already I have said too much! Let me go along with you, I will not get in the way; and if you suspect my motives, I will at least be at hand’s reach.”

Saying this, the young woman dropped her gaze, as if surrendering to the decision of the party. Miloš thought briefly, then looked inquiringly towards Žarko, who gazed back, then sternly nodded his head in consent. The two had understood one another without a word exchanged, recognizing the truth to the girl’s claims; whoever she was, she would not hamper them much, and it would be wise to keep her close, as she already knew more than one should. So Miloš spoke: “Let it be then, new companion! Go behind the horse and follow, but not quite in the back – I want to not worry over whether you will leave traces for someone – or something. And say also, before we set off, how shall we call you?”

The young woman raised her head. Her face glowed with an irrepressible joy – if she was pretending, she did so very convincingly. Perhaps she herself had not believed that she would succeed in joining the party, though her next words allayed any such doubts: “Marena is my name, but you can call me Mara, similar to the mora that I am… and thank you for accepting me, even though it was inevitable.” Saying this, she finally stood up from the elevated spot where she was sitting all through their exchange, and with quick steps strode across, taking her spot just behind the horse. The beauty of her movement struck everyone in the companionship, even more so the grace with which she moved despite the cumbersome dress and cloak, as well as the way each of her movements augmented her womanly form even under such unfeminine attire. After watching mora’s elegant glide in fascination, the now even longer column continued on its way. Žarko or Miloš would now and again look back in mistrust to see what their new companion was up to, but she only followed the horse with unbroken steadfastness, looking at the ground in front of her, as if completely lost in her thoughts.