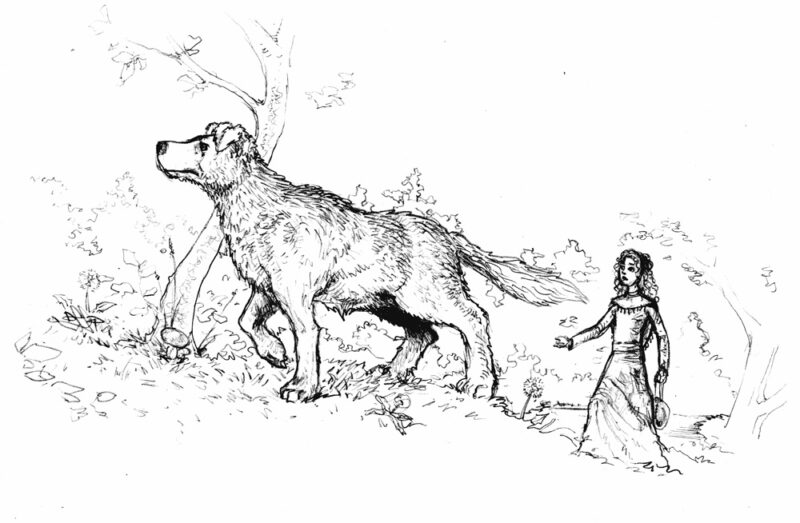 Senka was happy. It is not hard to be happy when you know so little. She could not know, as no one else could have, that her name was born out of a strange misunderstanding in the thick of a tragedy, but had firmly gripped her father’s story that her name was the last wish of her departed mother, the most important gift that she had left her with. In truth, the girl wished for her mother everyday, but this was only a vague desire for something not truly known, which could never be called suffering. She had a father whom she loved, who never raised his hands against her. Even the stepmother rarely beat her, and only when she truly made a mess of things and her father was not there.

From Senka’s point of view, life was far from bad. In her twelve years she had developed a heartfelt love for all that was around her. Apart from her father, she felt a deep love for her sister. Truly her half-sister, but Senka never thought of her in such a way, and she would not even have known what “half-sister” meant had her stepmother not used the word often when speaking to her own daughter about Senka. No, she was the one sister Senka had, and she loved her fully. And she never really cared that most of the household chores and disciplining was reserved for her, while her sister received all the love that her “half-mother” was able to offer (Senka laughed out loud the first time she realized that she thought of her stepmother as a half-mother, the “half” part a term that she had no doubt learned from her). She never worried about this lack of love which her stepmother made sure to show everyday – Senka may not have loved her, but she did not hate her either. She understood that her father needed a wife, as everyone needs someone to warm them in their bed; also, there was much woman’s work that needed to be done around the house, and Senka was still too young for most of it. She was completely satisfied with the kindness and affection her father showed to her, the endless care that she could see as love. In her father’s presence, even this half-mother was nearly pleasant to her. “I may even be getting more love from my father than my sister does,” thought Senka, “so it is fine that I am loved less by my half-mother. After all, as strict as she is with me, my father is just as strict with her! And if my mother were alive, surely she would love me more than my sister.” And so, finding all these necessary justifications in herself, Senka managed to live life without bitterness.

A great deal of Senka’s seemingly unlimited love was reserved for Vidra. Vidra was her dog, her devoted companion since the day she found him in the woods as a puppy, completely wet from tumbling through the stream. “Little Vidra,* so what are you doing there?” Senka asked through laughter, and from the wagging of the pup’s little tail, she knew that she had chosen the right name. Her father laughed when he heard it, confirming that she could keep the little male puppy “with a woman’s name,” but only if nobody came looking for the pup, and on that day there was no happier girl in the world than Senka. So it was… and now, more than three years later, they were still inseparable, the girl and Vidra.

“Vidra!” shouted Senka, coming back from her thoughts. “Now where is that dog?!” she pondered, “when he was here a moment ago?” Usually, Vidra would stay just to her right when they went to fetch water. Every now and then, she would try to confuse him, moving a step faster, then a step slower as they approached the stream. The dog would handle such games without a hint of effort, rather gracefully, succeeding always in not falling behind nor getting ahead. Senka even had the impression that Vidra would somehow always manage to run along at an even pace – she could never quite figure out how her dog managed to do so, and she loved him all the more for it.

Now the stream was already in sight: Senka had just passed between the two large trees that marked the end of the forest path (if one could call that narrow trail, occasionally trodden by Vidra and Senka, a path at all) and stepped out onto the small clearing in the forest glen. She was expecting to find Vidra, as she sometimes did, happily splashing about in the creek or slurping up water from the stream side. But that was not the case this time.

She stopped and looked around. The dog was indeed standing nearby, but was not looking at her, nor at the stream, but had already climbed up on the rise in the clearing, as if he was struggling to see something in the distance. Whatever it was, it lay in the direction from which they had come, and Senka immediately sensed the tension of her pet – such a thing did not happen often, so she was able to recognize the complete loss of the dog’s attention, the elongated ears which in such moments seemed to be larger that they really were, tilted slightly, and the barely noticeable raising of the dog’s hair. For a moment she looked back to the safety of the dark forest, then ran to Vidra, leaving the forest behind her, and peered out, following the direction of the dog’s gaze. From somewhere behind them, perhaps only a half-hour away, the time they needed for walking to the stream, a thick smoke was rising above the forest.

(*In traditional folklore, the female name Vidra has the same meaning as the word otter.)