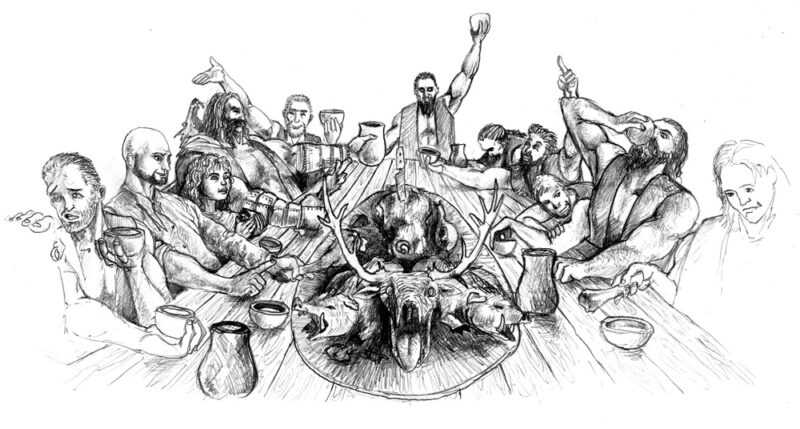 They were sitting in the central cabin, which Vuk perceived as some kind of unusual tavern. Everybody was seated on low, rough-hewn tree trunks, surrounding a large, round, wooden table, the only one in the whole large-roomed hut: Žarko, Senka and Vuk, along with another ten or so men. There were apparently no women in the village, or at least at the table. And the men were all hardened and strong, as if all coming from the same mold. They were dressed humbly, in fur vests similar to Žarko’s own, which revealed their sturdy muscles and broad chests. Except for some rough pants, also made from animal skins, which barely reached below their knees, they wore nothing else. No one carried any kind of weapon, and every single one of them was barefoot.

On the table in front of them were water, wine, and beer in simple pitchers made from pieces of hollowed out wood, lacking any kind of handle. From these pitchers they poured the drinks into similarly crafted small wooden cups, and the man whom Žarko referred to as host (though, at least to Vuk, the man seemed more an innkeeper) repeatedly rose to fetch new pitchers, changing out the empty ones. Most often fetched was wine, which Žarko immediately dove into. He right off rejected the cups as “too small” and instead grabbed one of the pitchers to drink from it. “A long time it has been since I drank a wine like this,” commented over and over the cheered giant, upon whose cheeks now shone a visible blush, while his eyes had taken on a bit of a bloodshot look. In front of them, at the center of the table, on a gigantic wooden platter, piles of roasted and dried meat were laid – the guests followed the example of their hosts, taking pieces with their hands; there were no plates and no forks, and the one and only knife was stabbed into a large shoulder of roasted meat in the middle of the oval platter, in case it was needed. There was no bread, no cheese, no salt – nothing but meat on the table. But that meat, despite being unsalted, was truly delicious, and all ate it heartily. Vuk gave Senka a little piece of everything to taste, and it seemed that in those heaps and slabs were all sorts of known and unknown meats. They were soon stuffed without having tasted everything. At one point, Senka asked if a piece of meat could also be taken to her Vidra, so even the dog, who had stayed outside with the horse, thus shared in the royal meal.

The host did not allow any serious matters to be spoken of until the guests had eaten and drunk their fill. Till then, the only topic of discussion had been the quality of their drinks, made from “water from the heart of the earth,” pulled up from a well located at the corner of the inn itself, along with endless rants on the best ways to dry or roast particular cuts of meat. Only when he felt that the guests had indeed been truly satiated, the host finally went into the topic of conversation which they all had eagerly awaited: “We rarely get a chance to listen to stories, which we love dearly. Thus, we would be gladdened to hear yours. You spoke of something troubling that was following you…”

And so, little by little, the usually very reserved Žarko recalled everything of importance which had happened to them over the last several days: the wine had obviously done its work and loosened his tongue. The men listened to him captivated, drinking in every word, exclaiming wonderment, approval, or excitement, which somehow always encouraged Žarko to speak on further. His story of encountering Senka started rather restrained, but as his narrative reached the rescuing of Vuk, he was already speaking in great detail, and by the time he got to describing the hellish wolves on their trail, he was almost exaggerating – he was so convincing that goosebumps broke out on the skin of Vuk, as if he himself had not been there to see that infernal pack. But the crippled thief remained as quiet as Senka, except now and again when a question was asked directly to him. Unlike Žarko, whose cheeks had grown more and more flushed as he had relaxed in drinking pitcher after pitcher, the thief and the girl were both still caught up in worries about their pursuers, as if they expected to hear the demonic howling in front of the door at any moment. But their hosts had obviously spoken rightly, comfortable in possessing a knowledge of which the guests could not be aware, as nothing disturbed the pleasant atmosphere of their feast. Or at least nothing but a subdued suspicion, probably fostered by concern, for Vuk had the constant feeling that these barefoot men were weighing him discreetly with their eyes, turning their heads aside whenever he would look to meet their prying gaze; he wondered if Senka had the same feeling, but did not want to spoil the pleasant atmosphere with unnecessary whispers, and so he never asked.

After hours of monologue, Žarko finally brought his tale to a close with his recount of the moment when he had seen the first cabin from within the stream they had been walking through. A hush then settled over the room. “And,” the host was first to speak up, “what do you intend to do now?” “Well,” answered Žarko, “I mean to wait here until morning, and to ask one of you, good people that you are, to lead us through these woods and out to the other side. Far from any path, and the closer to a town the better – if possible, one that is fortified. I believe that behind a walled town we might find a measure of security.” After the warrior finished laying out this simple plan, a moment of silence held the air, while the villagers looked at one another, before all together bursting into a thunderous laugh. Žarko did not find this reaction pleasant – his eyes grew immediatly more bloodshot, while his voice took on somewhat of a grim, threatening tone: “I do not know what is funny, people. Are you laughing at Žarko?”

“Excuse us, warrior-Žarko, we mean not to offend you,” replied the tavern’s host calmly. “It is just that you do not know how things are in this place. As I told you earlier, time flows differently here – and that was not a lie. You would wait until morning, but that is not possible. For when you leave Morlak, in the forest you will find it to be the exact same time as when you entered. You are welcome here to rest and recover for as long as you like, even though I believe that you have found your freshness already, but morning is something that you cannot wait for.” The man spoke all of this in a mild tone, almost as if explaining to a child some basic principles that are understood, and in which there is nothing strange to be found. “Also, you want one of us to take you out of the woods. And that also cannot be – none of us have ever left the borders of this forest, we do not know the way out of it. And to have found yourself here, this means you are lost in the woods, too – if you were to follow the stream backwards, you would never find the place where you entered it, as the water have erased your tracks and the forest have changed, so really you can only get out of it by chance, if you are to ever get out of here alive.”

The bearded man finished, looking Žarko straight in the eye with no hint of deceit or mockery – or fear. The rising rage in Žarko retreated at the man’s unusual words, and he could only mumble calmly: “So what then do we do, my host?” In the end it seems, they were indeed guests of a strange people, men who had welcomed them well and provided them comfort, and it would do no good nor be fitting to stir up trouble now: the practical side of Žarko’s wine-slushed mind understood that they already had quite enough enemies. The host then spoke up again, still not turning aside his gaze: “The way out of the forest we know not, that is how things are. But we do know that in the middle of the woods rises a large mountain, where shepherds herd their sheep. They risk passage through our forest, for they say among themselves that on the slopes of that mountain is the finest pasture that can be found. They do know a way through the forest, and we Morlaks know the way to them. And would gladly guide you there.”