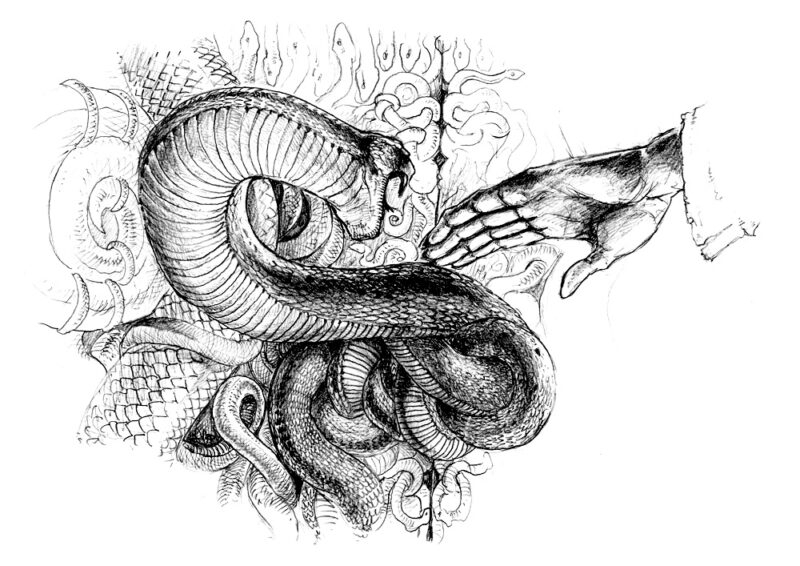 Before the others noticed her disappearance, Senka was already far away. When the sudden, supernatural light had emanated from Mara’s staff, penetrating even the darkness of her unseeing eyes and causing her to blink in reaction, she had simultaneously heard that strange lisping voice, as if it were whispering directly into her ear, urging her up: “Now… essscape… now… essscape…” And Senka immediately followed the voice’s urging without a question, as if she had been waiting for it. She resolutely pulled Vidra up, then followed the dog as it led her off to the right side of the knoll, holding tight to the poisonous, thorny crop of bushes, and then straight into the forest, thronging with their enemies.

Surrendering to Vidra’s instincts and the voice in her head, she somehow succeeded in making her way through the army of beasts, aided by the their temporary blinding at the unexpected and powerful light. Still, looking back later, she could not say just how she and her dog, with such sureness, managed to maneuver amongst the wolves and the trees, somehow passing hiddenly and silently through the perils surrounding them with nary an encounter. As if something much greater than they had set out a path for them, arranged so that they were always in the right place at the right time – stopping behind a tree trunk, downwind of a passing danger, or sheltered by dark cover, then moving again when opportune. They moved just as her name, Senka – shadow – would move, as noiseless as it was possible to be. She completely trusted this invisible guide, just as she trusted Vidra, whose fur she could feel constantly under her hand. While holding her breath as long as she could again and again, she felt not fear, but instead a restive excitement. She had taken her fate into her own hands (or at least believed this so), rather than wait helplessly for the uncertain end of a perilous battle. She expected that the others would fight fiercely for themselves, but in truth, she  gave them little thought – so deeply was she wrapped in her own mind that it now seemed  as if a blockade stood against any thoughts that might persuade her against this choice to venture into the unknown.

They had already moved quite a ways when Vidra suddenly shifted, causing Senka to fall to the ground. Her vacant eyes had no way of seeing the demon wolf with its blood red eyes racing violently yet voicelessly straight for them. Vidra though, without so much as a snarl, and not wavering even a second to bristle his fur, went staight at the beast, its bared fangs thirsty for blood. In falling, Senka only made out the vague sounds of a struggle, and one barely recognizable squeal, before the slamming of her own body against the forest floor was met by the thud of another body, slumping to its final gasps. For a moment after, all she could hear were the distant sounds of the battle behind them, and then she felt Vidra beside her, pushing at her arm with his head, urging her onwards once again. That which she had not seen, and which her ears had only captured in fragments and traces while her mind recoiled from the flurry, had all happened in the blink of an eye. A blink during which her dear dog, without warning or hesitation, charged at a wolf twice his size, turning into a seemingly no less terrible beast than the one silently coming their way. The attack was precise – the dog’s jaws clamping onto the wolf’s neck with a barely audible wrenching and then pulling backwards viciously, tearing away a large chunk of the wolf’s neck in its mouth. The creature gasped, trying to snap at the dog for the first and last time and failing, then crumpling to the ground at the same time as Senka; its legs were still kicking in the air as Senka raised herself up, leaning on Vidra’s back. As they quietly stepped away, the pair of gleaming eyes watched on helplessly until their dimishing glow extinguished, returning the demon back to the hell from which it had sprung.

Step by step, the pauses of necessity became rarer and rarer. While not moving at a very fast pace, they were surely and steadily, if gradually, leaving the ever-quieter din of the battle far behind them. Until finally, and seemingly suddenly, all the traces and sounds which had been reaching them vaguely disappeared, completely lost to the silence of the forest night. This happened so abruptly that it felt as if they had simply stepped from one place into another, closing an imaginary door behind them. Senka heard one owl cry out nearby, and then felt a gentle wisp of air on her face, realizing that the creature was heading windward. They were safe, this she knew. Then again that rasping voice appeared right at her ear, so that the girl almost jumped. “Jussst a little bit more… go on…” And Senka continued forward.

After some dim, indefinite period of time, at last they arrived to the place that appeared to be their destination, for the voice rose and commanded more sharply: “Ssstop! Jussst a few more stepsss and we ssstand before the gate. It will open willingly, for you have been sssummoned.” The voice then seemed to swish loudly, or perhaps let out a strong hiss, and Senka made a few more steps before opening a gate – one leading to the realm of the snakes.

Again some intrinsic force overwhelmed all the doubts that might have whirred in her mind, impelling her onward, so she was neither vexed nor startled by the strange smoothness of the gate’s handle, a handle which seemed to wind as if with its own will, pulling unnaturally under her hand. If she could have seen, it might have been harder for her to remain so calm, for the handle of this curious gate was a snake, alive or so true to life it would have been hard to say otherwise, whose head, open mouth, and forked tongue were turned upon the rest of its body, serving as the handle, exactly as if it were ready to bite down on any hand attempting to press it in hopes of opening the gate. And not just the handle, but the entirety of the two-winged gate, wider and taller than a man, with two doorposts crowned by snakes whose gazes mirrored back at one another, was made up entirely of snake bodies, interweaving into unimaginable ornaments that constantly writhed delicately, shifting in appearance before the eyes of any would-be entranced onlookers, yet somehow retaining structure and symmetry. This time, however, the only eyes taking in the spectacle were those of a dog, who showed no apparent alarm at such potential danger. And the dog’s animal instincts were not mistaken, for the snake’s mouth perched over the handle did not strike Senka’s outstretched hand as the strange gate slowly opened, or so Senka envisioned, to the sounds of bodies slithering. In truth, the gate did not actually open; rather, the snakes simply twisted their bodies about, releasing the pressure on the handle, and opened into a window of passage large enough for them to pass through. And thusly a blind girl and her dog stepped though into a place where no man or dog had long set foot, if ever.

Once they had passed through the gate, the snake bodies that composed its breadth again wound back into living ornaments, closing the passage behind the visitors just as they had opened it. Leaving the gate behind them, the guests slowly advanced along a narrow path surrounded on all sides by tall, arching poisonous briars – the exact same sort which grew on the knoll where the battle they had abandoned had finished moments before. While on this path, the voice finally revealed to Senka the purpose of their visit here. Its manner of speaking remained hoarse and faltering, but Senka had little trouble making out its words: “Do not fear, even though you are now being led into the serpent kingdom. The Snake King is my father. When we come to his court, since you saved me from the fire, he will offer you whatever you wish: silver, gold, precious stones. But do not accept any of these, and seek only the gift of primal language! He will resist at first, but, in the end, he will give in, even if only after you have refused everything offered and have turned to leave with no reward at all.”

And with this they arrived at the foot of the snake king’s lair, pulling the girl back from the swirl of her thoughts. Hissing suddenly erupted from all sides, and for a moment Senka was frightened, abruptly aware that all around her were snakes. Her dog, remarkably, remained once again completely calm, not even the hair of his coat rising as it would in response to perceived danger, and this settled the girl to some degree. Then she heard the strange voice at her ear one last time: “Ssstay now, sssister, I mussst sssay farewell…” And the peculiar coldness that she had felt around her neck, for so long now that she had become accustomed to it, at once released, her necklace once again taking the form of a living snake, which gracefully unwound from about her neck and slipped down her arm, then descended gently onto the floor of the snake palace. (Senka thought for a moment, with a scarce hope, that perhaps her sight might also return, but it did not.)

Then once more she heard, from a short distance, a hissing in whose traces she could recognize that familiar voice which had long dwelt so closely to her ears, yet now alongside it was a much more powerful hiss, which seemed to be responding to it. Following this brief exchange, Senka found herself in the imposing presence of the snake king! The serpent was colossal, a snake so immense it could hardly be thought to exist, yet to Senka it seemed, from the nature of his voice, that he could be mistaken for a wise old man, for the snake spoke to her in a voice entirely human in its quality, which, unlike the one she had come to know at her ear, was completely free of any sort of rasping or faltering; as clean and clear as the voice of a man.

“What do you wish for me to give you for saving my son?” he asked straightforwardly. Senka was for a moment fluttered, but then remembered her instructions and answered: “I want nothing but the gift of primal language!” To this the snake king replied: “That is not for you, young one, for if I were to indeed give you this, and you were to tell anyone of your gift, you would die immediately. Instead, tell me what else you are wishing for, whatever it is, and I will gladly grant it to you.”

NOTE: Read ahead on this site (up to 6 episodes) with exclusive Patreon Club membership tiers, or buy direct (eBooks & paperbacks), or follow the Kickstarter page for hardcovers & audiobooks.