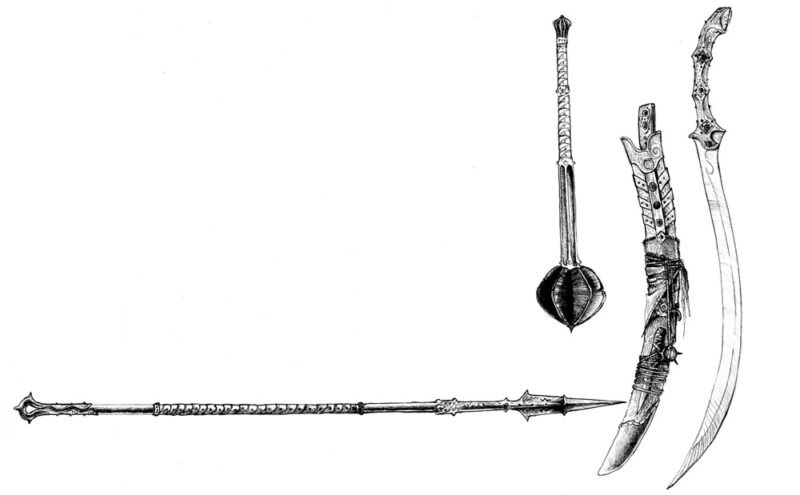 The burly warrior grunted his serious dissatisfaction over the weapons they had at their disposal: Vuk had absolutely nothing – the villagers who had wanted to take off his hand had never given him back his knife; Vukan also had nothing, while Brado had a small knife about his belt, more suitable for cutting forest plants than heads; Miloš had only his hunting knife and his hefty shepherd’s crook; Senka was not only blind, but also unarmed, while Mara had her strange, carved staff, similar to Miloš’s, though the women were not regarded by the men as serious potential combatants. Žarko swore hotly. Only he, a hardened fighter, was armed for two.

“Miloš, brother, do you want a sabre, if you know how to wield one?” he asked after a little hesitation, “For I will have enough weapons with my mace and battle spear and the hidden snake knife in my belt!”

Miloš smiled. “Gladly, brother, and I shall not disappoint you: I know how to cut both heads and branches! We can tally, if the battle lasts, which weapon will bring down more: your heavy mace or your sharp-edged saber.”

Žarko smiled back through his thick whiskers, pulling out his sabre from the scabbard and throwing it over to Miloš, who caught it deftly by the handle, made several slicing flourishes through the air, then took the blunt side of the blade by his other hand and examined it in the moonlight: “This is a fine saber, Žarko… a magnificent one even – I have never held a better weapon! And such a unique blade…”

The warrior responded: “The sabre was a gift, my Miloš, earned for arduous valor in aid to a king whom I do not serve. On it are three hilts of gold, each one with a precious stone; the blade can slice right through other swords, it is worth more than three kingly cities… And if we survive this battle, or even if we fall, that sabre is yours, my brother!”

At that, the shepherd chieftain quickly looked back at him and again the two men understood one another beyond words. Miloš hid his tearful eye, only nodding slightly, and they continued with preparations for battle. The shepherd chieftain gave his staff to Vuk and handed his knife over to Vukan, who strangely refused it, saying that he could handle himself without it; Miloš shrugged his shoulders, and then bent down to Senka, putting the dagger in her hands and saying: “May the grace of your gods allow this to stay unneeded, but hold it tight, for evil is nigh.” In the meantime, Žarko unclasped his battle spear from his back, took it in his left hand and then leant on it, while in his right he held his heavy battlemace, letting it sway lightly in the air. Miloš stepped over and stood beside him, resting his sword against his right leg while looking over all that lay before them. They were as ready as they could be.

And so the company braced themselves for the looming battle and the overwhelming odds against them. They stood in silence, swathed in the shadows of the ancient tree, anxiously awaiting that which was bound to come. No one thought about the outcome; their uneasiness did not stem from the likely defeat, but from the suspense of waiting – their options were expired, and now all that remained was that which the gods had set at them, and they thought only of how best to meet it. It was not the first time that Žarko found himself in such an inescapable position – very likely the same was also true for Miloš – and the others observed their demeanor and took it on as their own. Being brave is not about being without fear, but mastering that fear. And in the company of heroes, even the most modest of souls may become one.

The howling was becoming louder and louder. By the directions from which the voices whined out, it seemed as if the wolves were setting a noose about them and slowly pulling it tighter. Then the first three hellish beasts appeared. Demonic, for it would be hard to imagine a more apt description – their eyes shown through the darkness in a red, blood-tinted glow; it was these eyes that could be made out far before the beasts themselves broke out of the forest cover, and the black, long shapes of their bodies raged onto the grassy soil. The horse felt their presence and began rearing, neighing, and turning about in its spot, while Senka, from Vidra’s raised hair and constant muffled growl, knew indeed that trouble was finally upon them.

While the howling continued to echo from the distance around them, these first three creatures attacked them without a sound. Žarko reckoned that these wolves were much larger than any he had ever come across or heard of before, but then, without wasting further thought, stepped forward quickly to engage the closest one at the front. With unbelievable precision, he threw his battle spear directly into the open growling jaws of the first wolf. With that, he bounded in the direction of the second, closing the space between them in two quick, long steps, and then brought the heavy end of his mace crashing down on its skull between the ears, stopping the beast in the place, with its head planted in the grass. Miloš held his own as well: quickly charging the third wolf, which jumped at him in a full run, the shepherd deftly stepped to the side, dodging the attack, and sliced across the wolf’s neck with his saber, almost completely severing the creature’s head from its body.

Both heroes looked around, but these were the only three attackers. Žarko rushed over and with a strong tug pulled his spear from the first corpse, then quickly retreated back under the tree’s cover. “Well, there it is… they have found us!” Vuk muttered, giving grim voice to what was clearly known to them all by the circle of howls pulling tight about them, so close that their eyes now darted around, trying to catch a glimpse of the invaders. Žarko, however, was now in a much better mood – the waiting and running was finally over and he could, at last, fight! “I am not sure if you are counting, my brother, who of us is ahead thus far in the battle?” he snorted to Miloš through his thick mustaches. “But it is still early, and I am still only getting used to my new saber…” responded the shepherd with a wide smile. Their attention, however, was then drawn over to the muffled murmur of the men of Morlak, who were urgently articulating something to Vuk as he stood leaning on Miloš’s staff…

… but all of this was suddenly interrupted by a horrible shriek that curdled the blood in each of the companion’s veins! There was nothing human in that screech, yet they knew that it could not have come from the throat of a wolf, nor from the dusk imps. It was a powerful, high, sharp, resounding scream. It ripped through the night air like an arrow, with such force that their ears pained with its echoes, even though it seemed still far off. And it must have been some kind of command, for right afterwards the forest fell into silence, and only after that silence lingered awhile did the trapped party again hear the spine-chilling whirring of wings steadily approaching from a distance. And through the forest’s undergrowth, like hundreds of flickering candles, pairs and pairs of red eyes began to appear… The creatures above and below were gathering at the edge of the small clearing, still unwilling to emerge. Soon they were entirely surrounded by a legion of eyes staring at them from the dark.

“Do we have a shred of hope left against this many?” Žarko turned to Miloš. “I do not know, Žarko, it does not look good, but we will not give our heads away lightly!”

In that uneasy quiet that hung in the air as they awaited the impending attack, all of the companions’ ears were again drawn to the strange, agitated chant-like conversation which the Morlak men pressed on with, in urgent whispers, all directed at the cripple leaning on a stick.

“Remember, Vuk, remember who you are…”