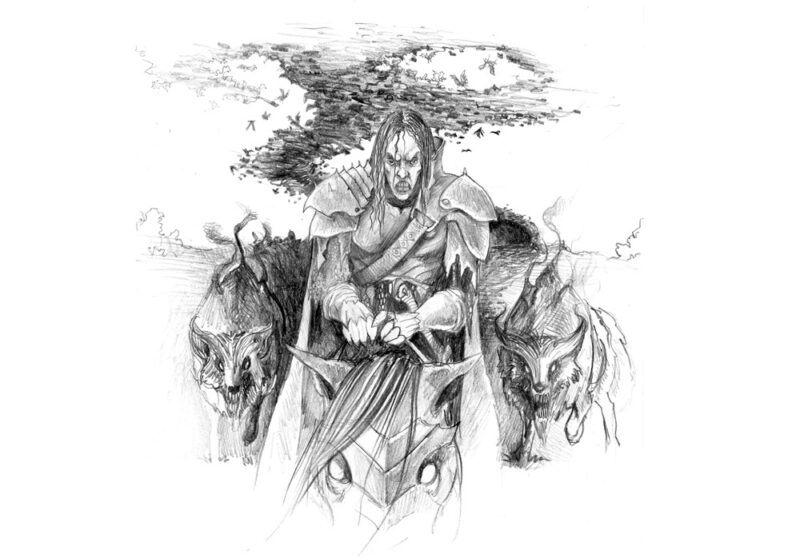 The horseman and the winged cloud above halted just a few horselengths away from Žarko; he thought he could reach him with a few quick, deliberate jumps, if only his fool horse would obey him. Now the two riders surveyed one another, cautiously and inquisitively. Žarko knew full well the kind of impression he made on people when he scowled; he imagined that those people felt quite similar to how he was feeling at this moment. The horseman confronting him was downright frightful. Through the murkiness that accompanied him and the shadows that concealed him, he saw a heavy black piece of armor that covered his chest, and underneath that armor, a sheath of thick chain-link ringmail draped across his body like a shirt, dropping to his thighs; in his cloaked belt was a saber of enormous proportions, even by Žarko’s measure, yet the horseman did not even rest his hand on its hilt, let alone have it pulled out. He was attired entirely in black, so uniformly dark that it was hard to discern any gaps between the armor, his sheath, and his legs. Žarko was barely able to observe that the rider wore full black gauntlets extending down his arm to his fingertips, and long black boots up to his knees – the only thing unblackened was his livid white face, bordered by his raven black hair draping down to his shoulders. This whole appearance elicited a strange impression – one that was sinister, yet at the same time lordly and almost beautiful. Whatever aberrant sort of beauty this was, it was tainted by the glow of his blood-stained eyes and red-blotched cheeks, and the deception in his posture and performance seemed obvious and purposeful, as if staged in a play just for Žarko’s eyes to see.

But in examining him more closely, Žarko began to pick out details that seriously marred the original impression given off by the black rider: his black hair hung down in dirty whips, and his clothes at the folds were ragged, old, and worn. “This hair was not braided by handmaidens, these garments not washed by any servants,” thought Žarko. And this thought gave him a fragment of sudden pleasure, inducing even a momentary smile. As if in answer to this smile, the rider in black tugged hard at the reins of his horse, which whinnied out a terrible screech. This momentarily undid Žarko’s whiskered smile, prompting him to speak quickly and loudly.

“Hail to you, unknown knight! What good quest has brought you here, if god knowest?”

Then the horseman responded; to Žarko’s great relief, since he was uncertain as to whether this spectre would speak at all. The voice was dry and crude, as if he spoke with effort; at the same time threatening and scratchy like a muffled growl, yet somehow entirely articulate, so that Žarko could clearly make out every spoken word:

“Know this, man, who recognize me not: a king-warrior I once was, but for long now, much more than that! And I know not what god you serve, but it surely is not mine… No, who are you, you crazed nomad rambler? Rare are men who dare to stand in my path, you should bow before me!”

Now Žarko felt emboldened, for this was his ground; he had been through such exchanges countless times. “Hear, warrior, in front of you stands Žarko: my path goes wherever I go, and I bow to no one! I am neither here for you, nor do I step down before thee.”

The rider now seemed to smile himself: “So you are that Perunović Žarko…” His scowl was a parody of joy, horrific like the grinning of some rabid beast.

“And you seem to know me, stranger. But… I know not why you mention Perun, when I serve not him, nor any other god: honor to them all, but Žarko serves no one!”

The terrible smirk on the face of the horseman grew wider: “I know you well, you mad Žarko, at least from some stories. Who has not heard of Žarko the hero? But heed this, hero: it would be wise for you to get out of my way. I will not bother to scuffle with you, since I have nothing with you.”

“You argue well, king-warrior, but you make do poorly! Tell me with whom you have something, and let us see where that leads.” With these words, the smile vanished from the rider’s face, yet Žarko almost enjoyed the scowl that replaced it, even if it was equally horrific when the black figure spoke again.

“Listen, Žarko: do not play the fool! I do no explaining, save to whom I serve now. And even then, only when I choose to, because I, too, bow or kneel to no one! But fine, if you wish to know, I will tell you this: I have an unresolved matter with that lass who fled me. Let me have her, so we may part on good terms.”

At these words, the man with the mace frowned, unintendedly and openly. “Listen, stranger… as it happens, that little one is my sister in fate, made so by the will of the God of gods, the God of the heavens. As much as I might wish to, leave her to you I cannot, for that would be a great sin. And I would not let her go even if I had not become brother to her fate. Therefore, it is better that you just turn your great horse around, so that we can part peacefully!”

Then, there was silence. The horseman glared at Žarko, inquisitively, while Žarko gazed back at the rider defiantly. And then the black-tressed man laughed with his whole voice, a laugh as sharp as a knife’s blade, raw and cruel. And short. After ridding himself of this hollow pretense of mirth as suddenly as it had begun, the rider spoke:

“Very well, Žarko, if that is how you want it to be, I will allow it. Why clash here where there is no victory? My sabre might not be meant for your head… But think again, and think quickly, for in the dead of night my pack will set out in hunt. We will hunt for what is ours, and kill everything in the way. Kill, wound, or simply trample, it matters not. Beware, Žarko, that your path does not lead you across mine again!”

And after saying this, the horseman spurred and raised his horse, turned, and rode off, away from Žarko, followed by the high screams and wing flaps of the creatures above his invisible crown, not looking back even a single time. It was clear that he was not fearful of Žarko, and that made it even less clear as to why he would at all accept to withdraw. But while a biting chill still lingered, whether from the unnatural cold or the unmistakable threat which the stranger’s final words held, Žarko finally allowed his limbs and body to relax somewhat. For the time being, they had pulled through. Yet it was now high time to ride off, and, reviving and turning his horse with a sudden twitch of reins, the large man spurred it into a full gallop, riding back to the spot where he had left his companions. Night was approaching. Long, perilous night.