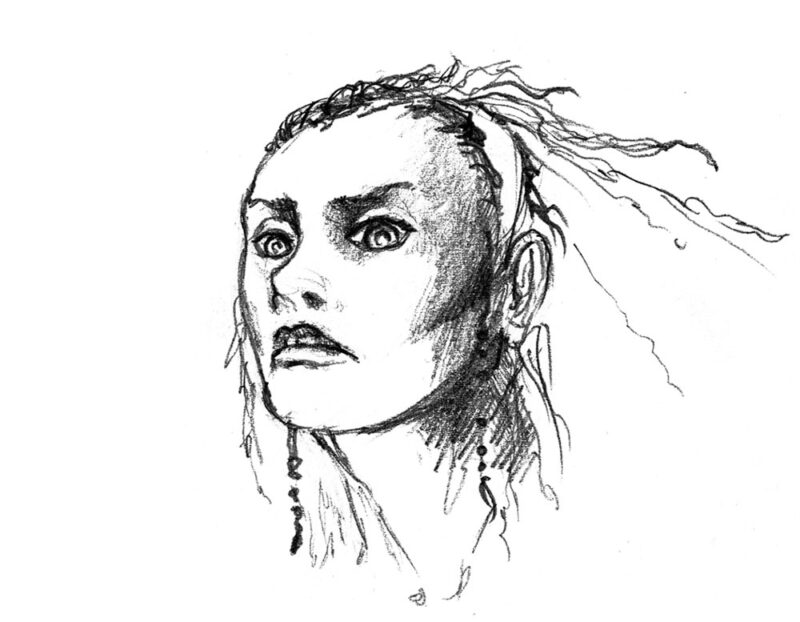 Mara, Daughter of a Witch

Vuk did not feel right with this mysterious girl walking just behind his back. She did not inspire his trust, and if he had been the one to decide, she never would have joined them. But no one had asked him – the decision belonged to Žarko and Miloš. As for Senka, she was not sure what she felt. On the one hand, she was somewhat cheered that she was no longer the only female member of the group, but on the other, this young woman made her feel oddly uneasy. She felt that very little could be kept hidden from her, and it was not a pleasant feeling, even for a little girl with not much to hide.

From the moment she had joined their companionship, Marena was silent, not sharing a single word with anyone since their initial conversation. But perhaps it was better this way, since everyone in the party remained anxious about her presence, excepting perhaps the two men in front. The daughter of a witch! All of them knew, if only from stories, that such a child was destined to become a witch herself, and from very early on would have begun to learn the “craft” of witchcraft, from which it seemed no good could come. And Mara made no attempt to hide this; had she not said herself that she was the daughter of the greatest of witches, something still reverberating upsettingly between each of the party’s ears? So, consciously or unconsciously, they all kept their distance from her as best they could.

“I had just found some relief in the passing of night, and look now, a whole new trouble to worry over…” thought Vuk, and the others likely had similar thoughts. The weight of Marena’s presence among them had pushed from their heads everything else she had spoken of, even though those weighty implications demanded serious consideration. They all acted in accordance with the age-old belief that a witch cannot be trusted under any terms (even if this one was a mere mora who had revealed that she had not yet achieved full witchhood). As for the other ominous matters, they were more than willing to forget them all for a while and simply worry over the one and only thing she had let be known about herself.

The day slunk by in a mood of gloom – the relief of having survived the night was replaced by a witching discomfort, made worse by the constant grumpiness of Žarko, still grunting over his swapped-about shoes. This giant, who just hours earlier had been ready to single-handedly fight the entire demonic army, now behaved as if this trip was the greatest torture imaginable. If not for Miloš, he would have long ago given up on this nonsense and dressed himself back as one is intended to be; only Miloš’s disquiet whenever he would mention doing such a thing kept him in a semblance of belief that this whole mess of switching things around – and making fools of themselves in the process – could somehow indeed save them from some unseen peril.

It was almost evening, and already for the tenth time they had halted because of the warrior, when Mara spoke up for the first time as a member of the party: “You can now end your bizarre disguise. That danger has passed.” Miloš looked back at her sharply: “How do you know this, companion?”

She answered him gently, as if clarifying something that should have been already understood. “I know much, my lord Miloš, even if I know not how, or from where this knowledge comes. Just as I know that you are dressed backwards because of the danger that is the lord of the forest, and not so you would look like a bungled troupe of fools to any one you might come across, I know too that this danger has passed. And I know what it is that is following you…” And here Marena stopped, making it tantalizingly clear that she would not talk any further if they were not interested in hearing her out.

At this, Žarko suddenly jumped into the conversation, already too fed up to suffer Mara’s ambiguities: “Speak up, woman, and speak now, so that Žarko does not open your mouth for you!”

“If you so insist, Žarko… this fellowship, so now me as well, is being followed by something utterly impure… and evil… It is something that you must have all heard of, and surely considered sinister and horrific, but the one that is following us is much more than just this… if creatures such as these roam the black places of the earth, dark and lifeless, preying on the living, then this one is their undisputed lord. There is no other way for me to say it, though my tongue repels – the foul thing in question is nothing other than… a vampire!” Having said this, the young woman already knew what scornful reaction would follow: Žarko raised an eyebrow in a pose of mocking disbelief, while Miloš smiled down at her like a child speaking nonsense; nonetheless, she continued, unwavering: “Yes, a vampire… look at me as you will, but that is exactly what it is. And it is not just any vampire – what follows us is the Nightlord, with his army; before his untimely death, the greatest of warriors, yet revived as a dark servant of the most foul forces many years after his fall. Unusual for a vampire, as even any villager knows that a man can be vampired only within the first forty days after his death, but that does not hold true for this one… Perhaps centuries passed from the time of his death before he was reborn – in darkness. And as far as I know, it has been ages since such things have existed in the realms of men. For devils such as these, it is said, in contrast to other vampires, they sleep not even during the day, and they can even bring others to darkness themselves…”

“Wench, stop with such nonsense!” interrupted Žarko, shouting at her. “Even if there ever were such beings, even a child knows vampires are only to be feared at night – by daylight it is impossible to come across one!”

“You think so, Žarko? I know you have wondered at why that dark horseman – and see here, I know indeed that it is a horseman! – did not attack you upon your first encounter. Think again why it is so…” Žarko’s gloomy look spurred her to get to the point quickly, as this was no time for riddles: “It was still day! His strength then is far from its peak, which he does not reach until the dead of night, and which holds until the first flickers of morning. Remember that cloaking swarm of imps? Their role is not only to serve as scouts – no, they serve an even more sinister purpose: they create night for their lord even while the day lives! Think well over this, then tell me again that it is impossible…”

And this time Žarko did think it over. And while he did not believe any of it, he could not deny the countless oddities and wonders that had come upon them in this short time – why would a vampire not be yet another? “It is not that I believe you, witch,” he finally grumbled, “but there is one thing that concerns me: can such a thing be killed? By blade, or mace, or battle spear?”

Mara had been awaiting just such a question: “He is unnaturally strong and almost invincible, but yes, he can indeed be killed, just as any vampire might be: the most opportune way would be to pierce his heart with a wooden stake, best if made from hawthorn, but by the looks of it, your spear would likely serve well enough. The other way is more difficult: his head needs to be cut off, but he must be beheaded so completely that every last scrap of skin is detached from the rest of his body, otherwise the vampire will put his head back on and escape, and with time the head will coalesce with the body once again. It is probably safest to do both things, and then burn the corpse – only that can guarantee that an ancient vampire of this sort will never return to torment this world again. That is, unless his soul escapes before this is done, which one should not allow.”

A grave silence followed, as all of them puzzled over what they had just heard. Some with fear, others with disbelief, and some still thinking over the hidden intentions this unusual young woman held. Miloš was the first to bring forward a new question: “As you seem to know such secrets, is there more that you would care to share?”

Mara looked him back straight in the eyes, aware of the distrust. “Since you ask so graciously, my lord Miloš, then I will tell you so: I know that we could rest right here until the dead of night, because we face no imminent danger, but I would not suggest that, since I fear that you might think that I am up to something wicked…”

This left Miloš in bit of a bind, unsure of what to do next. He could see that Žarko was at the edge of his patience, tired and unwilling. And he knew that, after so much strenuous pushing to get to where they were now, they were still nowhere close to exiting the forest before dawn. While he thought on, he saw that Žarko had already started switching his shoes back to normal, as Mara had suggested. “Since it seems we have a witch with us, we might as well listen to her once in a while…” grumbled the brute, somewhat embarrassed (or at least as close as to embarrassed as he could be) by the disappointed look of his brotherly companion. Miloš, at this, relented: “Very well, Žarko, if you say so, then let us listen to her fully on this! We are more than exhausted – some rest would do us good.” And so the company decided that right there on the spot, in the middle of the forest, they would rest until the approach of midnight.

Vuk volunteered to take the watch. “One does not get so tired on the back of a horse, and the rest of you have been on foot for a long while, so I will take the vigil.” No one had anything against this. “The females sleep beside the tree, and we men around them. So if something visits, let it meet the warriors first!” With these sparse words, Žarko had set the sleeping arrangement, and all of them could hardly wait to lay down on the ground. Senka curled up against Vidra on one side and kept her other side as far as she could from Marena. The horse was let loose to roam about and graze, trusting that Vuk would stop it if it were to wander too far afoot. The sun had yet to fully set, and already the entire companionship, save for the watchman, was fast asleep. After half of a night and a whole day of slogging, the rest was indeed hard-earned.