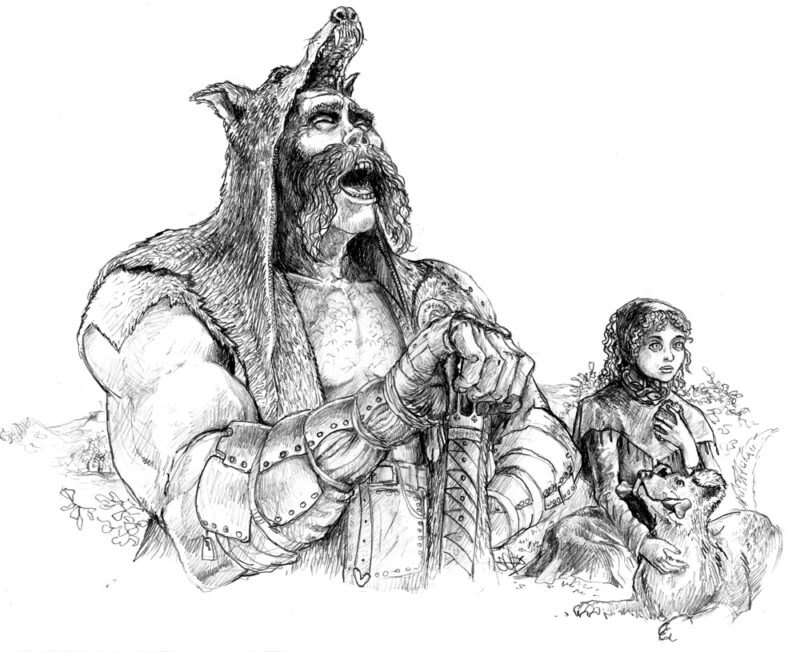 “What to do with you, lassie? To lead you onwards would not do, but to leave you here is worse!” These words the strange man spoke more for himself than anything else, the longest string of words Senka had heard him say during the whole morning. She felt desperately like crying, like pleading for herself, for help, to throw herself into his arms… but she remained silent. They were eating the leftovers from the night before, some kind of tasty meat which the rider had carried along with him under his saddle, very likely the last bits of some wild game which the man had himself hunted.

After a few more minutes during which Senka ate in silence, the mustached man announced his decision: “For now you will stay with Žarko, until we find you a home.” This time Senka could not stand to wait and immediately asked: “And who is Žarko?” This triggered an eruption of laughter from the man. This gargantuan laugh, which hardly resembled a laugh as one would normally think of it, went on and on, and it seemed like the man was barely able to catch his breath as he replied: “Who is… har-har-har… who is… why, it’s me, you poor thing! I am Žarko, who else would it be?!” And so Senka, just then, finally learned the name of her odd companion, even though she had already (more than once!) recounted the details of her recent calamities for him, as well as the brief story of her life.

And off they headed, the man announcing resolutely that it was time to depart. Senka did not know where to, but she also did not care; in the company of this man she felt more secure than she had ever felt in her short life, not really knowing why. As opposed to the evening before, when he had placed her on the back of his horse as he led, her companion now showed far less gentleness – Senka went on foot behind the horse, holding on to its tail with one hand, and onto Vidra with her other. The stranger kept the horse to a light pace, and this with no trouble whatsoever; any observer would certainly see that the animal was already overburdened by the size and weight of such a rider alone, and the walk was likely what the horse would choose anyhow.

Senka would have been, if she were to think about it, surprised by the speed at which she adapted to life without sight. Her eyes were now Vidra, and her step was perfectly aligned with the rhythm of the hoofs of the horse whose tail she held onto. And she felt safe. She did not stumble, but already stepped firmly, sure that this strange rider was already choosing a way for her. Everything was happening so fast that she did not have time to acknowledge, let alone grieve for, what she had lost, and her young spirit had become almost immediately accustomed to this unexpected adventure that now made up her life. She did not know what tomorrow held, or even what to expect in an hour or two, but that was exactly what she had longed for in the unmeasured days of her carefree, but also monotonous and fairly lonely childhood. She had dreamed of far away places, and now she was on her way to them. She has lost everything, but all that she had lost had already begun to look more and more like a far-off dream, like the sad story of some other person. Having lost her eyesight, security, and the chores of ordinary life, forced by cruel fate to rely on previously neglected senses and on chance encounters with strangers, Senka was reborn as a new person. She was open to the world around her, for there was nothing left to grab onto in fear of what might come. Deprived of every support, this girl of twelve was forced to fly like a leaf swept off a tree. And now she flew, aware of every step, every word, every sound, every moment. Senka was alive.

“There, a village near the road. I will fill my wineskin there… and buy a decent horse, because this old nag is at her end.” Senka realized that she was enjoying all of these rare proclamations of her protector, for that is how she had thought of him since the first moment they met. His statements were guideposts, dictating the direction of her current life. And this last one seemed prophetic: as soon as the rider spoke these words, the horse just collapsed underneath him! “There! See, I said so and I did not lie!” shouted the man with a dose of droll complacency, and then, without wasting another moment, he took upon himself all the things that the horse had been carrying with difficulty. After he slung his heavy weapon about his belt on the left side, he went onwards, allowing Senka to grab on to the muscle of his right arm. He even merrily whistled something almost like a tune. The village was close by, and he was pleased that the remaining walk would not last long.

And so they went forward, leaving the dead horse (or dead-tired, Senka was not sure) behind them. They went along on the only sort of road that Senka had ever known; not the one paved with cobblestones, like those supposedly known to larger places and towns, which her father had once spoken of (this sudden thought of her father elicited a brief wave of sadness), but rather an ordinary path of stamped earth, occasionally rutted and collapsed, just wide enough for the passage of a horse and wagon – in the rare event that two horse carts might meet going in opposite directions, one of them would have to stop and turn off of the path so that the other could pass.

After a short while, the familiar sounds of a settled area began to reach Senka. The road led right through the village, even widening a measure, unlike those “real” roads which her father had spoken of, which would skirt about the edges of towns rather then lead into them. She could not grasp that only by hearing, but this village was not much bigger than the only other settlement she had seen before, and also looked more or less the same. A bit more than a hundred souls, dwelling in twenty or so houses. In the middle of the village stood a small tavern where one could get a drink, a meal, or a place to sleep for the rare traveler passing through, and just across the road was the one and only store in which one could find anything and everything: from foodstuffs and small items, to weapons and tools, and even horses, which were kept in a stable behind the shop. The road became flatter, and Senka no longer needed to lean so heavily on Žarko’s arm. For a moment she thought to completely let go; she wasn’t sure how the villagers would look at the sight of a blind girl holding onto the forearm of a large man instead of a stick, or whether Žarko might feel uncomfortable because of it. But her companion walked on in at an unbroken pace, with that same natural confidence which Senka had already learned to appreciate, so she simply relaxed and continued to curiously listen and take in the world around her.