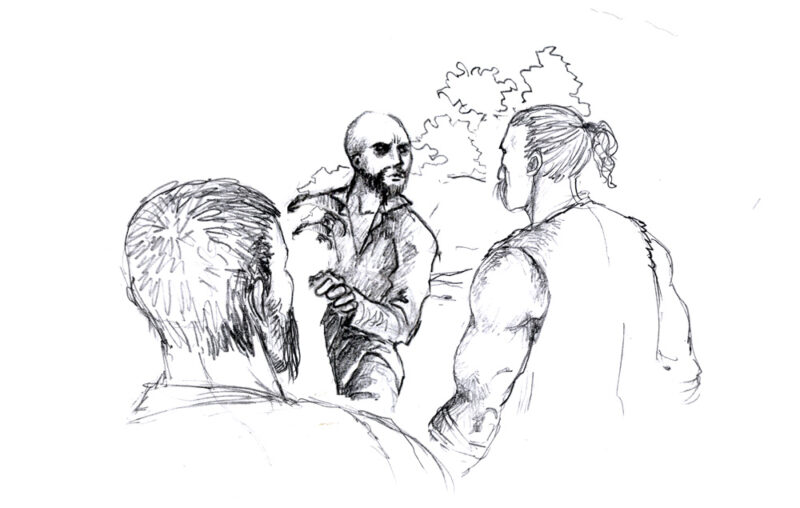 Chanting into the Night

The conversation which had started in whispers was slowly but surely turning into a loud argument, with the men of Morlak now almost chanting rather than talking.

“I do not know, men, what you are talking about…”

“Remember, Vuk! If you are the one, you must remember!”

“Remember, lame wolf, your true self! The prophecy of your arrival is as old as Morlak – Remember who you are!”

“Enough, men, let off! What to remember? You make no sense!”

“Remember yourself, lame wolf! Your arrival is foretold – that you would come with strange friends, and that you still would not know!”

“Know what?! And who could know of our arrival? Whoever told you this nonsense, it certainly was not about me!”

“It is foretold that you would not know, but that, when danger threatens, you will remember. Remember who you are!”

“Men, I cannot say it any clearer – I know not what you are talking about and have nothing to recall!”

It was obvious that Vuk felt more and more exasperated with the incessant onrush of words the two barefoot men set at him, their badgering only increasing in intensity at this worst of times. Then, without warning, one of the two men from Morlak suddenly grabbed the cripple’s shirt with both hands and ripped it open. Moonlight exposed his shaggy chest, at the same time revealing something curious on the side, high up on the left of his breast: a striking black mark could be made out there, in a shape most similar to a wolf’s head. But only for a moment, before Vuk let out an upset snarl, dropping the stick to use both hands to pull his now torn shirt back across his torso. “Are you crazy?!” he mufflingly yelled. The two men pulled back, their faces lit with wonder.

“It truly is you, leader of the pack!” The voices of Morlak men exclaimed together in one breath, now overcome with awe, though finally maintaining a small distance from the limping man. “You came with strange friends, and lame, not knowing yourself, and here is the mark etched on your chest!”

“People, for your god’s sake… that is not some drawing on my chest, it is but a birthmark. By that shape I was named Vuk, a lone wolf!”

“That is as it should be! It is said that this mark of the chieftain is the sign we draw upon our chest. Remember who you are, leader!”

They then both pulled their vests open, under which they wore nothing, each revealing that just to the left and high up on their upper left breast, in precisely the same spot as Vuk, they were marked with the exact same sign. This at once both jolted and confused the lame thief, who remained momentarily wonderstruck.

And no matter how enthralling it might have been for the rest of the companions to follow this unresolved incident to some end, their attention was suddenly wrenched by the harsh and abrupt laughter. A laugh that burst forth and began to emanate from the forest, a cruel, gratingly mocking laugh drawing quickly closer and closer. Its dissonant echoes were still grating across their ears when, from out of the shadows, appearing against the curtain of blood red eyes, emerged the black horseman. And surrounding him, above his head and all around, swarmed the hideous imps. These little beasts, like grotesque miniature people twisted into the shape of bats, seemingly covered the sky above the forest, a dark moving mass blinking with the small fires that occasionally flared out from the almost infinite number of their momentarily silent mouths. Now, as the laugh of the dark rider slowly faded into the night with the imminence of his arrival, the company on the clearing could hear only the overwhelming whirring of their wings and feel only that indescribable chill cutting straight to their bones, setting the stage for the approaching black menace.

And what a terrifying sight the horseman was! While Žarko had felt fear even at their first encounter, it now seemed as if his heart was frozen. On this occasion there was nothing left for the light to reveal, nothing ridiculous to be seen. The night had shrouded the hint of blush on the rider’s cheeks, straightened his disheveled hair, softened the tattered clothing – as if the night had been the missing element in their first encounter. Even his bloodshot eyes now had a flaming splendor, bearing no resemblance to the redness of tiredness or drunkenness, but possessing a clear, unbridled cruelty. Before the companions stood a figure of twisted royalty, haughty and callous, endlessly terrible in its sinister stance, which emanated from every part of the rider’s body, every piece of his vestments, even from the horse on which he rode. And Žarko, for the first time, believed in some of Marena’s words – that in front of them, poised, was indeed the true lord of the night, vampire or not!

The horseman had resumed his arrogant and hideous laughter as he rode slowly out of the forest, with this terrifying cackle acting almost as a servant, advancing ahead of the rider himself to pierce the very hearts of his opponents; and mercilessly it persisted, ringing out and echoing, finally ceasing only when the horse, having made a few slow steps, brought his rider completely out into the clearing. Then the dark rider spoke, his voice now completely free of all the hoarseness and rasping strain that Žarko remembered clearly from their first meeting. Now the speaker’s voice was youthful and resonant like a crystal bell, reminiscent even of Miloš’s, but possessing an unmistakable note of unshackled violent intent; one could not say whether the sound it made was pleasant or unpleasant to the ear, for the utterance of each word sent needles shivering up the skin of every listener.

“We meet again, mad Žarko… We meet, though for you it would be better that we do not! Did I not tell you plainly: ‘Beware, Žarko, that your path does not lead you across mine again?’ I see that you have not heeded me, so now you must reap what you have sown!”

Žarko did not want to waste this unexpected chance. Instead of answering, he suddenly and swiftly hurled his battle spear, aiming for the horseman’s heart! It was a powerful throw, and the spear cut briskly through the night air, yet even more quickly the rider swung his enormous saber with astonishing agility, knocking the flying spear sideways and just off its intended mark. The bladed head of the diverted spear still managed to strike the armor of the breastplate, but it just glanced off its front and fell to the side, like a branch attacking a stone wall. What devil’s armor was this, that not even Žarko’s strongest throw could penetrate?! And the momentum itself, which would knock even the best warrior off his horse, was simply not enough against this adversary – after a slight twitch, he remained stoically seated on his horse, which, under the force of the blow, swayed to the side, but kept its footing, then gave a loud and menacing neigh of victory. The horseman glared furiously at Žarko’s band of companions for a dire moment, and then screamed:

“Onward, horde: time for us to feed!”

And in shrieking his command, the face of the horseman seemed to visibly warp and stretch, like a mask tearing, losing with these final words any remote trace of raw beauty and humanity, and what remained in its stead was nothing but sheer, bared malice. The demon wolves rushed in from all open sides, running forward past the horseman in a furious charge towards the luckless bunch trapped atop the rise.

Even as the short speech of the horde’s leader unfurled, the two Morlaks, as they called themselves, still pressed on in chanting at Vuk in almost hypnotic rhythm, so focused that they paid no attention whatsoever to the events closing in upon them:

Vuk looked as if snared in confused turmoil. His attention constantly shifted back and forth, from the entrancing babbling of the two barefoot figures, to the events unfolding on the edge of the forest. He visibly twitched, upset, when the wolves lunged forward on command. Žarko and Miloš, meanwhile, awaited the rush, well-prepared for battle: the saber cut through the air first, slicing down two of the animals in one swoop, the first’s severed head flying off the remainder of its body, while the slashing motion continued through the other’s open mouth, gaping the demonic jaws even wider; the return stroke then cut through the forelegs of the third monstrous attacking animal, leaving it snapping its terrible jaws in vain through the open air, while still furiously sliding on the ground just a few steps from its unbitten victim; yet another charging hellhound stumbled upon the wriggling fallen body, only to be met by the sharp point of Miloš’s unrelenting curved blade. Meanwhile, with one mighty swing of his enormous battle mace, Žarko took down three of the demons at once, tossing them aside to the left like a bloodied furry mass, striking in their misshapen flight several more beasts who were racing up from the other side and disabling their progress. The now fevered cripple, despite his confusion, managed to raise the staff he had been given by Miloš and at the last moment strike one of the beasts that had somehow made it through, staggering it momentarily, while Brado, in the blink of an eye, jumped on its back, extinguishing it deftly with his knife before straightening back up, as if nothing had happened, and rejoining Vukan in their frantic incantation: “Remember, Vuk, remember, leader, remember for all of us, for our time is running out! Remember, chieftain-Vuk, remember who you are!”