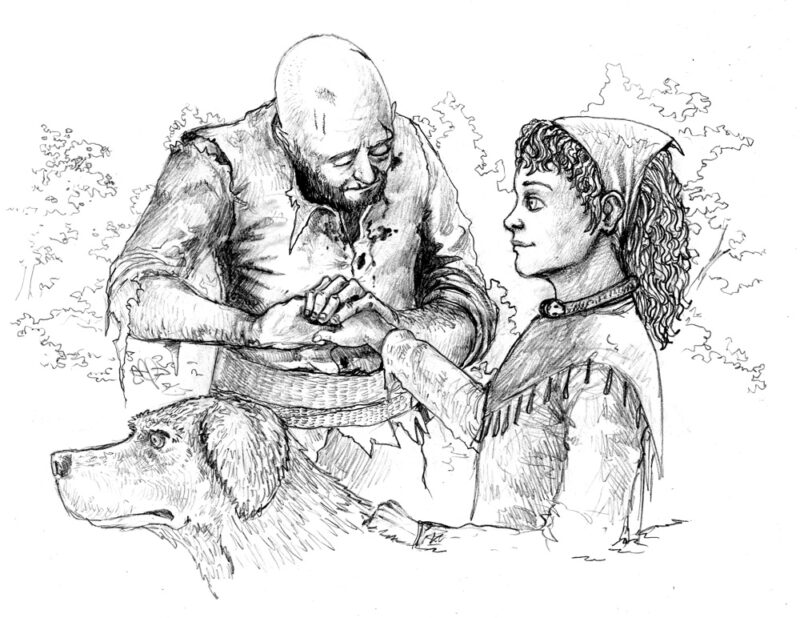 “Eh, my Žarko… who have you gathered around you? First a blind girl, now a cripple! Without a doubt, an impressive lot…” The big man went on, occasionally muttering to himself under his breath, allowing the horse that was carrying both him and food to wander off relatively far in front of his companions. Senka shivered at the thought of how upset Žarko would be if he also knew of her illness, which seemed to return at the worst moments, but she quickly dispelled such thoughts – she did not want, not even in the slightest, to be an even greater burden to her protector.

When the saved man figured that Žarko could no longer hear him, he spoke for the first time, addressing Senka, who was walking unsteadily alongside him. “Thank you,” he said, “as I assume that you have played a large role in my unexpected salvation. I am sure that a warrior such as Žarko would not even look back once at a fellow such as me – it is you that I have to thank for still having two of these.” With that, he extended both his hands and folded them about Senka’s – her free hand, the other was holding constantly onto Vidra’s back – saying: “My name is Vuk, and I am eternally in your debt.“

Senka opened up unusually easily to this strange man. Thief! Her father had spoken about such persons with disgust, yet something in the tone of his voice assured Senka that every word this man uttered was true. He was not looking for explanations, but Senka offered them anyway. He had not asked, but Senka told him the whole story of the strange events that had fundamentally changed the course of her life, and which had led her to hang on the back of the rough warrior who was now her guide and guardian. After listening to her story all the way up to her first encounter with Žarko, the man who limped audibly next to her left side suddenly sighed strangely, and Senka left off her tale in mid-sentence. Taking this as an invitation, the silent Vuk spoke.

“And up till now you have not yet asked yourself who he is? Who is this man who saved you, and then me?”

Senka was confused by the question. “Well, he is Žarko. Or at least that is what he said his name is…”

Vuk spoke on in a completely serious voice, so Senka remained unconscious of his smile: “And truly, that is how he is called. I know, because I have heard stories about him in all the villages and cities through which I have passed, from the shores of Ohrid to the foothills of Mount Miroč. That is Žarko. Everyone knows of him. The greatest warrior-hero, the bravest, the strongest, and, though fiery and dangerous, always just. And yet all the stories of him seem to pass around him. Did you notice how in that village he did not know anybody, even though everybody seemed to have known him? Perhaps… well, I would not be surprised if they had seen him before, for that kind of fear in an entire mob cannot be caused by just one man, even one as large and strong as he, no matter who he says he is and how imposing he appears…”

Vuk fell silent. They continued far behind the big man on the horse for several minutes, and Senka realized that the limping man was thinking over whether to continue speaking further. Though now quite curious, the girl remained quiet, letting him reach his decision. Finally, Vuk abruptly continued on with his story, just as suddenly as he had fallen silent.

“In a small town, in a tavern, quite some time ago, after a great deal of wine and even more beer, I heard a strange story. Now, like any other story, it may be true, and it may be not. I found it hard to believe it that day, but now I am not so sure…” Vuk paused as if to take a breath, then continued: “The story speaks of a great warrior-hero, the son of a god, who was named Žarko. It is said that this hero was the son of Perun the Thunderer himself, while his mother was a mortal woman. And so they say there was nothing other for that child but to become the greatest of all warriors…” A short silence arose and lingered for some moments, and Senka felt that Vuk was cautiously observing her reactions to his story, perhaps weighing whether his words seemed too unbelievable. At last though, as if having pushed through some troublesome barrier, he broke the suspenseful silence and the rest of his narration proceeded without a single pause.

“Yet, only when that child had indeed grown into a warrior like no other, did this story become truly interesting. If I was lied to, then I am lying to you now as well, but it is said that it was the time when the gods were clashing over the division of our world. More precisely, over who will be given charge of the lands through which we are now passing. And as you might imagine, agreements are not reached easily among the gods, those gods you know well and those you may not know of at all. Conflict seemed inevitable, and who knows what would come of it, had not the gods, in their final attempt to resolve the division of the world, sought the opinion of someone outside of their circle. And, well, who could offer such an opinion better than the greatest warrior of our world, the son of the god of justice and lightning, and thus comparable to those beyond compare. The most powerful among the gods assented to this resolution – even though he could have taken what he wanted by force – for the sake of avoiding conflict, believing that his own earthly son would surely rule in his father’s favor. And so messengers were sent out for him, powerful horsemen who could trample over all in their path, but who bowed before such a warrior. They told him that the gods were quarreling, and that he had been called on to say who should rule over the lands. The gods believed, at least as the narrator told, that: ‘Žarko will decide this justly, for Žarko fears no one.’ And not only did he not fear, but his mother had advised him before her passing: ‘Žarko, my son, my one and only, do not speak wrongly, neither for your father’s behoof, nor in the behoof of uncles, but speak with the true righteousness of the god of justice! Truth is stronger than any sword, it will be your sharpest weapon.’ And so the hero went to pronounce judgement on those who judge…

“Of course, for the story to be interesting, the righteous division of the world that would be proclaimed would in the end please the god of justice the least! For who can judge the bringer of justice itself?” Vuk here laughed a bit to himself and continued on in a quiet voice, all the time taking care that the horseman in front of them could not make out what they were speaking of. “You see, Žarko proceeded to scold the gods well, each god in his turn, sparing not even his own father. He told them that they had become lost in their conflicts, that they scrambled for lands that were not theirs. He told them that this was the kingdom of Dajbog, made for him by Svarog, the creator, out of the darkness of his first dream, for his first son only. He told them, he told the descendant gods: ‘From the father it dawned upon the son, the first son of God almighty!’ When Perun the Thunderer, the mightiest god of this world, heard this verdict, one which he never could have expected, he grew red with rage. He jumped at his son, striking him with thunderbolts, and he, even the great warrior-hero that he was, ran: he ran away as fast as his legs could carry him. For he did not think it right to fight against his own parent, a fight he would also be sure to lose. And it was then that he would have died, as the story goes, had not his angel interfered: like a cloud of light, the angel descended in front of the enraged god only to be struck by a thuderbolt that would surely have killed the god’s son. This guardian had sacrificed his immortal life for the life of Žarko, and so was he left without his angel, unlike you, me, and all other people of this world, and therefore there is no one left to take him to that other world when his time comes… And so our hero escaped, yet the consequences of this judgement he voiced unto the gods, he carries with him to this day. Perun cursed him while Dajbog blessed him, and both of these legacies have made him what he is today.”

Vuk now dropped his voice almost to a whisper, more and more careful that a stray word not accidentally reaches Žarko’s ears. “I think that I memorized word for word all that I heard that night in the tavern. It is said that Perun proclaimed the following: ‘Žarko, my son – may God strike you dead! You shall know no grave nor kin, bereaved of throne and origin! You will wander without end! May your soul never ascend before to the conqueror you bend!’ Perun cursed him, but with this came also Dajbog’s blessing: ‘My brave Žarko, God still smiles upon you! You are lit by heaven’s light, you will strike forever right! There shall be no greater hero! Your name shall be ever spoken while there shine the Sun and Moon!’ And much of what was proclaimed has come to be, though some of it may yet…”

And here again Vuk sank into silence, broken by the occasional sound of his limping feet pulling across their path. Senka remained alone for a while in the grasp of the story, taking time to gather her impressions. “And you think that…” she finally uttered. “I do not think anything!” Vuk interrupted. “It is just a tavern story.”

After another pause, however, he could not refrain from speaking his mind. “And yet, here we are, followers of perhaps the greatest of heroes, whose name is known by all. A warrior who wanders from village to village, from town to town, and knows nobody anywhere, though everyone knows him. A hero whose accomplishments are so much greater than could be accomplished in a single human life. A warrior who men look upon in fear, and women with adoration. But who, in spite of everything, remains alone, just like you and I…” And Vuk drew in a long breath, during which it seemed that he was preparing the great conclusion of his story: “I do not think nor claim anything… yet, there you have it, if anywhere in this world exists one man who can die only by the will of the creator, God of all gods, I would be willing to bet my freshly-spared hand that he is riding on the horse ahead of us.”