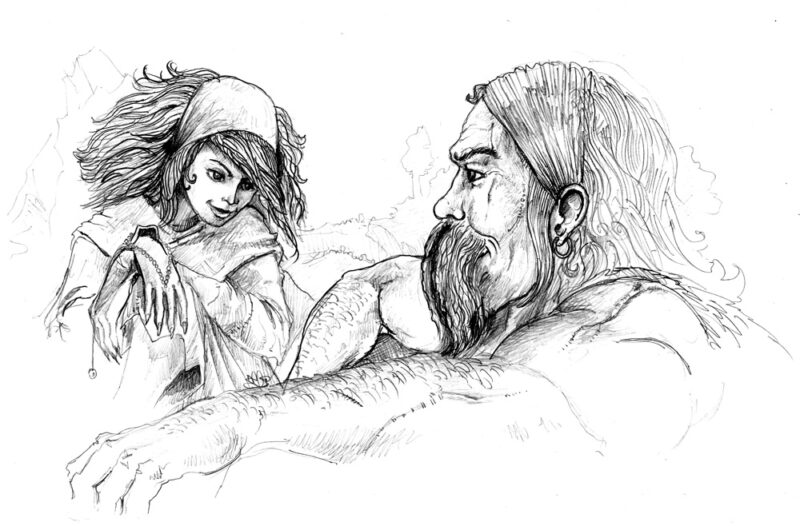 A Nightmare on the Move

Before midnight, they were awoken by Vuk. By the moon’s position, it was clear that the dead of night was not far off. First Miloš, then Senka, then Brado and Vukan were shaken from their sleep. When Vuk got to Marena, he hesitated a moment, but then she awoke just as he leaned over her. In moments, all of them were already up on their feet, except for Žarko, whose snoring continued. For who would dare wake him? Moody after shaking off sleep, he might kill someone just in banishing the evils of his dreams…

Who else then, but Miloš. He shouted over to him, from afar: “Have you rested, Žarko? It is a hard day’s night ahead of us…”

Žarko startled from his sleep, snorted through his nose once so hard that it looked like his mustache might fall off, and grunted: “I have not slept a wink! At all! I could not breathe, it felt like drowning, darkness like a nightmare straddling and pressing down upon me…”

“A nightmare? Surely a mora pressed upon you, since you had not pressed against her! You know what they say, greedy as a mora on a young fellow…” a mocking voice answered from behind him. At this, Žarko jumped, still sleepy, yet already grumpy, but when he saw Mara standing there with a mischievous little smile, he let his anger go. “Damn you, you wicked witchy-wench!” he raised his voice at her a little, succeeding even to smile harshly, only to turn it into a grimace a moment later when he, with a muffled cursing and a quick brush of his hand, knocked to the ground a ladybug which had carelessly settled on his neck. The young woman again smiled jeeringly: “Do not curse the bug that brings you luck… as she is a lady like me!”

Soon the group had gathered itself and resumed their march, finally dressed more fittingly. As they went, Žarko and Miloš asked Vuk if anything out of the ordinary had happened during their sleep. “Nothing whatsoever…” he told them. There had been no sound of hellish wolves, nor imps, nor any other unnatural forces. He was still saying so when, without warning, a lone long menacing howl broke the night’s silence! Like an anguished cry, but this time much closer than it had been the night before. Too close. Everyone froze in their place, only to hear a number of other wolves’ voices wail back, as if answering, and all of these as if they were just behind them.

“Get moving, folks, trouble is upon us!” hissed Žarko. And with this they immediately began rushing forward, moving as swiftly as they could while trying to make as little noise as possible. He spun a look at Mara: “We are safe until the dead of night! Is that what you said, damn witch’s daughter?” She answered him, also in a pressed whisper, as quickly as she could in this rush: “And have I misled you, Žarko? Did any danger come to us thus far? What I knew, I spoke – but now midnight approaches, and danger with it!” Žarko did not seem convinced: “Ahh, you tramp, you tricked us… while we rested, the enemy overtook us! Safe until the dead of night, my ass – we are more likely dead this night! By gods, if the going gets tough, your head will be the first to fly!” He then doubled his pace to join Miloš at the head of the column.

“You are asking, Žarko, of our chances? I would not bet a single sheep on us!”

At this, Žarko ruefully let a sour smile, then spoke again: “Well then where do we go, brother? If we are to lose our heads, I would rather take off a few of the enemies’ than have them get us at our backs, slaughtering us one by one…”

“Just run onward, warrior! A short ways ahead is a small rise, half of it ringed by thick brambles of poisonous thorns. If we make it to there, that would be a good place to make a stand; then we shall turn any way you want, and fight as you wish!”

The agonizing pursuit raged on. Behind them they could hear the constant howling closing in, and soon from a distance that terrible whirling of shrieks and wingbeats began to ring in their ears. On top of the night’s darkness, a more eerie blackness was coming for them. A chill began to stab at their hearts no matter the hot sweat pouring down their skin. Yet on and on they pressed, fleeing in a dash without stopping. None of the fugitives could say how long this chase was lasting – it seemed as if they were running forever, or at least a whole night’s length. Sapped and ever short of breath, they wished simply to collapse to the stony earth, but their instinct to survive spurred them forward in a race for their lives. Finally, they arrived.

When they at last gained the ground which Miloš had marked for their final stand, they were soaked through with sweat and battered from their scrambling. Even Senka and Vuk, who only had clung to the horse’s back during their desperate exertion, were covered in scratches and breathing heavily. Yet fear remained stronger than exhaustion, and the chased party quickly turned about on this small knoll, no higher than a man, surveying their lot and trying to determine the best position for confronting the adversaries close on their heels.

The rise they found themselves stranded on was nothing more than a small forest slope, gradually rising to its highest point, where stood a huge tree with magnificent branches, somehow offset from the rest of the surrounding forest. Around the tree, all along the semicircular elevation, the ground was swept bare, covered only by short, stubbly grass, while closing the full circle on the backside was a thick patch of thorny briar, just shorter than a man, which covered the remainder of the rise, crawling toward the tree, gnarling about it densely in closer proximity than the rest of the forest. They had to admit that, given their circumstances, Miloš could not have chosen a better place, with a wall of poisonous thorns to guard their backs, though he warned them to remain aware of the thorns and not get too close, even in the thick of the fight, for he had already lost one shepherd to their sting. Upon Žarko’s quick approval, Miloš related that the shepherds had come across this spot once while making their passage through the woods, and from then on used it as a place to make camp – the small clearing provided enough grazing for the sheep, while the thorns made for ample protection on the one side, so that just one man could watch over the entire flock. And, as if confirming his words, the companions noticed the remnants of a campfire near the large tree. “It is a pity that we will hardly live long enough to relight that fire ourselves,” thought Vuk grimly, though he kept these thoughts to himself.

Žarko, clearly the most experienced in combat among the party, took upon himself the organization of their defense. Women were to remain in the rear, beside the enormous trunk of the tree. Žarko told them to climb into the tree if things turned for the worse, but until then to sit tight against the trunk and rest – the dusk imps would have a hard time seeing them under the cover of the thickest clumps of branches. As soon as Senka sat, Vidra curled up against her legs. The horse was tied to a low, thick branch, quite close to the thickets of thorns, but not so close that it could scratch itself upon them if frightened. The men were also instructed to stay within the range of the tree, while Žarko laid out the strategy in the case an attack penetrated. He and Miloš would attempt to hold the exposed center and the right flank, for, as the warrior commented: “anything that can get through Žarko and Miloš will be very difficult for any man to handle.” Vuk, Brado, and Vukan were given the joint task, to the best of their abilities, of defending against anything that made it through on the left and of blocking the approach to the tree, protecting the women at all costs.