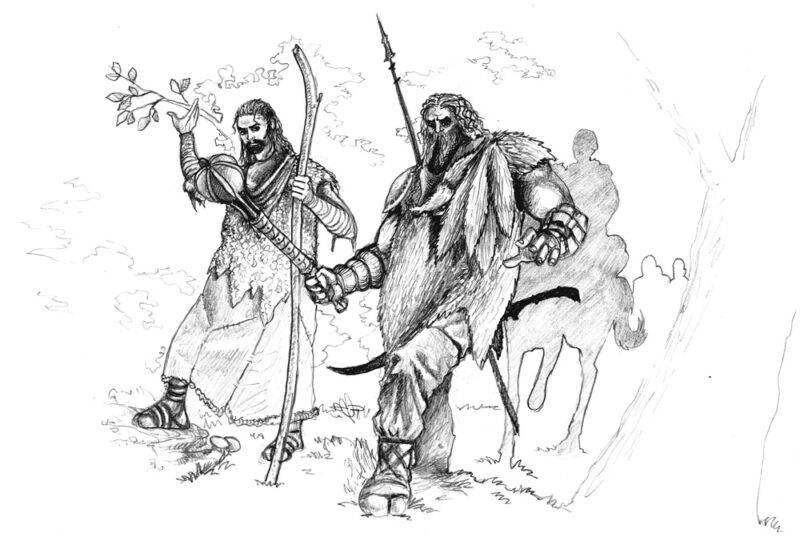 The Way of the Chieftain

Miloš and Žarko, nearly step for step, went together at the front of their column. Miloš led, and Žarko again retold their story, this time speaking the true version of the past days’ happenings. He skipped over only the part about Morlak, even though Vuk, who could follow their conversation from the horse, was sure that even this would be told, as soon as the two Morlak men accompanying them at the back of the column eventually left the party. Brado and Vukan were no longer attempting to conceal their tracks, since they were advancing too fast – Žarko hoped that they had already succeeded in losing their pursuers, and so he was against any additional slowing down. Miloš obviously knew the way well, for he led them along an unseen path as if it was made for passage, and they advanced at a quick pace, dictated by the pair at the forefront.

Miloš told Žarko that they would not make it out of the forest that morning, but rather by the following one, at best. “The way is long, my brother.” And so it was agreed that they would push on without rest. It was remarkable watching how these two men spoke calmly, their voices barely louder than their footsteps, while at the same time leading the column forward through the woods at almost a run. Vuk realized that Miloš, in some inexplicable way, seemed to bring out the best in Žarko. For the most part sullen and grumbling, the warrior now moved with an agility which earlier he had not seemed to possess, all the while talking in the most pleasant and cordial way. It was simply hard to believe that this was the same man who, just a bit before, had almost caused a scuffle in the herding camp. Vuk realized how glad he was that this Miloš was with them, and hoped that it would last as long as possible.

Žarko asked their guide directly where he was going and why. After a barely noticeable hesitation, Miloš answered: “I am going to the town of Vučitrn, but do not ask my why. I can only say that I am pulled by what is strongest in this world: even a shepherd, free in the forest, cannot resist the love of his dearest.” He added that he would later tell him more, once they exited the forest and escaped from the evil following them. The shepherd chieftain was now fully aware of the enormity of their danger, yet seemed neither disturbed, nor frightened – Vuk felt certain that he would accompany them regardless of the threat. Žarko suggested that, when they succeeded in emerging from the forest, they should go with him to Vučitrn as well: for quite awhile he had been thinking that behind a town’s fortifications they would be secure from that which hounded them. Miloš agreed wholeheartedly.

There was something very similar about the way these two carried themselves – even if Žarko was a good deal rougher, they still spoke and moved alike, and appeared to understand each other perfectly. There were not too many questions in their discussions. As if two long lost brothers had suddenly found one another, they seemed to possess an understanding that went beyond words. In another situation, this might have made Vuk think deeper, but his mind was now more than occupied with worry over their pursuers; he often looked back or up at the sky through the branches, trying to spot any sign of oncoming danger. He also asked Senka to inform him when or if she heard anything suspicious – he realized that the girl now fully relied on her sense of hearing, and that this should not be underestimated: even he, who was not blind, could hear better after keeping his eyes closed for some time, and this had become apparent to him over many of his nighttime ventures in thievery. He thought, marveling for a moment, how human nature had ways of sharpening other senses at the expense of the missing ones, and with that again directed his gaze upward into the sky.

And as for Senka, she was lost in her own thoughts. While listening to Žarko’s tale once again and, as part of it, his brief overview of the small, uninteresting life that was hers until just a few days ago, she began to grasp the grand scale of the adventure she now found herself in. Žarko managed to condense all that happened to her prior to the burning house into just a few brief sentences, while his recounting of the few following days could stretch for hours. She also pondered over how the group of people around her seemed to grow by the hour. And what did she know, really, about these people? Absolutely nothing – she was travelling with a bunch of strangers, whose lives were a mystery to her. Of Žarko she knew nearly as little as when she first met him; even though she had spoken much with Vuk, their conversation had never hit upon his past, so she could say the same for him; and now here was this Miloš, at first impression irresistibly composed, and yet again just one more about whom she would likely not be able to say a thing – while as for the “Morlaks,” these men were an unexplainable mystery not only to her but for all, a riddle beyond her imagination. She wondered if the others were thinking over such things, this essential unknowing of their own companions, but then, with almost the skill of the greatest philosophers who she also knew nothing about, concluded that this is perhaps always the way, and it did no good to think too hard over it.

In their rapid journey they were soon greeted by the morning. From the moment that Miloš had joined them, they had not once come across a fly-by of the imp scouts. Were they moving faster than their enemy assumed? Was it possible that they had succeeded in somehow escaping the black menace? Yet it was now, with the coming of morning, that Miloš for the first time seemed concerned, but for another reason. He was just telling Žarko that this day they would be coming to the most dangerous part of their journey. The section ahead was the reason that no one, excepting him and his shepherds, ever attempted to lead their sheep to the greener pastures at the foot of the mountain in the middle of the forest. It was a hazardous area in which it was often possible to encounter a being of the wilderness which all men would do good to avoid – Lesnik, the lord of the forest himself.

“It is said that he may be encountered everywhere, for every forest is his kingdom. Yet it seems, just as any shepherd, that he also has his favored nooks and vales: we have come across him twice in the area that lies ahead. I would rather not speak of it now, but heed my words: we barely weathered that storm alive. And therefore I would recommend…”

And so the party accepted the strange measures of protection which Miloš went on to suggest: they halted briefly, while all but Senka took off their upper layers of clothes and turned them backwards, doing similarly with their shoes, so that on their left feet they wore those that would normally be worn on the right. Then they continued their journey, with their company now looking truly odd indeed: it was quite a ridiculous sight to see these giant men with their vests spread open on the back, while the higher back parts now rose up to the front middle of their necks, nearly strangling them. Even more so, contrary to the Morlaks, Žarko and Miloš were visibly hampered by the wrong foot shoes that constricted them, while the chieftain’s otherwise cumbersome cloak now made him look like a bear walking about on two legs. All of this of course significantly impeded the progress of their march. The men of Morlak suffered it best – they were at least barefoot, so they still moved through the woods with a silent grace. Vuk and Senka, seated on the horse, were also spared from the worst of the discomfort of their switched over shoes.

Žarko, whose behavior until then had been a model of restraint, now began to sour: “We have listened, brother Miloš, and did as you asked, without hesitation. But tell me this frankly, please: are you fooling with us out of spite?” And again Miloš had an appropriate response for Žarko. He laughed out loud, from the heart, not minding the danger, then said: “God above us as my witness, Žarko, out of malice I would not torment you, that much should be clear. Only madmen would mock thusly! I am not playing you for fools, but must insist again that this is the best and perhaps the only safeguard.” Their guide then went on to explain how Lesnik could not see travelers dressed up in such an incongruous way, or perhaps he did not care to see them; ever since the shepherds had begun to dress oddly as they passed through these woods, they had stopped encountering the lord of the forest.

Despite their earlier agreement to make no breaks, they now had to: Žarko would simply stomp to a halt whenever it became too much for him to take another step, and the others had but little choice than to follow his example, waiting for him to show his intent to move on again. His already familiar boorish behaviour returned in full, and everyone had to put up with it, yet Miloš simply guided them on as best he could, without paying it any mind.