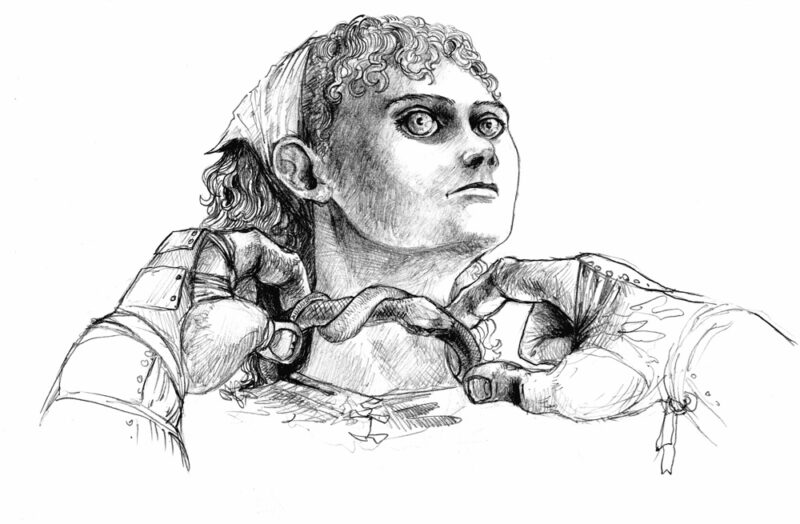 “You say, lass, that you know not why some are after you?”

The question was asked in a clearly doubting tone – and even someone as young as Senka, unsophisticated in conversation, could make out the clear disbelief expressed in this short sentence. They were now scrambling through the woods, as quickly as was possible. After coming together once again, Žarko told them that they must stray off the path. The forest would offer some semblance of shelter from the watchful eyes of their followers, even those above. This time the burly man was displaying a bit more sympathy, or rather the situation simply demanded it: either way, Senka and Vuk were now seated on the horse, while Žarko led it by the halter at a hasty step, quickly and decisively choosing a way through the forest dark. But if he had by any chance seen the rapidity with which the crippled man had moved just shortly before, on all fours, as he and the girl ran away, or the agility with which he had climbed up the tree and came down when he heard the gathering shouts, it would have made it immediately apparent as to how this supposed thief might have succeeded in such a vocation, and then they would probably have switched places on the horse. As they hastened, the dim light of the full moon would occasionally break through the branches above, signifying that the dangerous night had long ago already begun – thus far, however, there had been no sign of their pursuants. Yet the question of their whereabouts was far from the only one on Žarko’s mind – his surly curiosity was far from abated. Beyond the still lingering question of why she was being followed was the essential mystery of what exactly it was that was after them…

“I do not know, Žarko. Truly, I do not.” Senka was still frightened, along with bewildered by the tone of the question, so she was answering on the verge of tears.

“Really, sister? You have not, mistakenly or purposefully, concealed something?”

Žarko’s questioning was now becoming too forceful for the girl. He never was a lover of mysteries, and here he was running from one, a completely terrifying one at that, and still unknowing of the reason. This was surely making him anything but pleasant to his companions. Senka again answered that she did not know who or what was following them, nor why. She was no longer able to withhold tears from slipping down her blind eyes – she felt as if was losing the barely gained trust of her protector. From the tremble in her voice, Žarko made out that she had started crying, and softened his voice somewhat.

”Sis, come now… do not cry. But I must know from what are we running away – our heads depend on it. If I know what we are up against, then perhaps I can beat it. This is why I am asking: are you sure you have told me everything?”

For who knows which time, Senka again responded that she knew not a thing about their assailants. And Žarko fell back into a deep, unsettled silence, seemingly focused only on choosing their path, for he was no longer sure what to think or how to behave. As opposed to Vuk, he remained doubtful. While Vuk had fully accepted Senka’s life story, like many other stories which he had listened to patiently and attentively over his years and journeys, Žarko saw it all as the fantasized tale of a poor orphaned girl: the sudden fire, the striking cold, the manner in which she had become blind… sure, he had been entertained by her minutely decorated story, even pressing her to tell it again and again and not finding any inconsistencies, but not for a moment had he believed any of it. Without much thought, he had come to the conclusion that the little girl had simply beautified her tragic story into a fantastic truth. Which was not so important, since for him in essence she remained exactly what she was: a blind orphan who asked for help. And he helped her. But now he was no longer certain… then, suddenly, he stopped the horse.

“The necklace. Let me see it, little sis.”

For a moment, Senka did not understand, but then he was already standing beside her, trying to remove the necklace from her neck – the metal necklace which Senka called “the wrapped snake,” and this was indeed its shape. He was not able to take it off, however, and the young girl let out a breath of relief, long held while he had fumbled with the smooth metal and then agitatedly turned away from her. That was the moment when Senka decided to say nothing of the snake’s voice reappearing – she did not knew why Žarko would regard the wrapped snake as the source of their troubles, but she knew well that she wanted to dispel any kind of reason for her protector to forcefully remove the “necklace” that hung around her neck. Slightly astonished, she now suddenly realized she somehow trusted the snake that made her blind; disturbed, she envisioned telling them everything, fearing that some magic was influencing her will, but just then she felt a pleasant warming sensation around her neck, and the hint of a doubt which she had felt for a moment slipped from her mind.

They continued moving through the forest at a brisk pace, Žarko still in front leading the horse forward. Soon, from the noisy burbling of running water, Senka recognized that they had reached a wide stream – one that sounded very much alike to the one she had listened to so often back home. Their leader, without hesitation, stepped into the creek, pulling the horse along with him. Since the sound of the rushing water never left them, Senka realized that they were now actually marching onward in the stream itself. As if reading her mind, Vuk, who was sitting just behind her on the horse, leaned over and whispered into her ear: “We are following the brook downstream – this way the wolves will have a harder time picking up our tracks and scent. A very wise move, in my estimation, for we can perhaps fool them in such a way. Our fair leader is not only mighty, but also clever.”

Time took on a different flow in their constant state of expectation. Senka could not say for how long they had been trekking through the water: minutes or hours, but she was alert constantly, all the while hoping not to hear the sound of those horrible wingbeats and cries and howling from behind her. After some time, she finally managed to single out a gentle splashing sound, quieter than the muffled steps of the horse’s legs as it made its way through the water – Vidra had as well followed their example and was trotting in the stream just behind them. It made her proud, but all these sounds of water also made her suddenly realize that she was thirsty.

“Žarko, could we stop for a moment? So I can get down and drink some water?”

“No!” Vuk cried out. This was so sudden and unexpected that it startled Senka, while Žarko stopped and looked back at him. Vuk then explained more calmly: “The stories I have heard about the dusk imps, those ghastly little flying creatures, say they can poison an entire lake, so that anyone who drinks from it would fall dead from just one drop! This creek is flowing and so disperses the poison onwards, but we have no way of knowing whether the poison is in front of us or behind us, or whether we are walking through it at this very moment, if it is in the water at all. No, it is not safe to drink this water. It is not safe to drink any water we come across until we are certain that they are no longer following us; for now, we can rely only on the water we carry with us.”

Žarko looked at him oddly: “What nonsense are you talking? Why carry when there is water at every step? And I have only wine. Perfectly good wine, mind you, and there is enough for all.” At this offer, Senka mumbled that she was not so thirsty after all, and so they moved on down the stream, the hum of the water now tinged sinister.

Their march continued quietly, the party warily listening out for whether, above the mild murmur of the stream, that more disturbing buzz from above would be heard. And finally there it was – as if they knew it was bound to happen sooner or later. Žarko pulled at his horse to make a few brisk steps before coming to a stop under the cover of a large tree, still in the creek, with thick branches draping over them. There they stood in complete silence, as the perverse buzzing and shrieking came closer and closer. There was no need to say anything, as they all understood what loomed above them. The dreadful scouts were likely flying over the forest in every direction, looking for the girl. Senka held her breath, as if these flying things above could hear even her breathing. There they stood, motionless and waiting, as if petrified, even when the sounds of that infernal swarm had seemingly moved farther away. Only when the distant sounds were utterly drowned in the gentle humming of the stream did Žarko pull at his horse silently, nodding thoughtfully for them to continue. Judging by this recent arrival of the spying scouts, it must have been close to midnight, as the dead of night had been marked as the beginning of the hunt. They remained speechless, still pensive and anxious. Soon they would likely know whether they had succeeded in covering their tracks, though actual safety and survival were still far and away, with many long hours of night ahead.