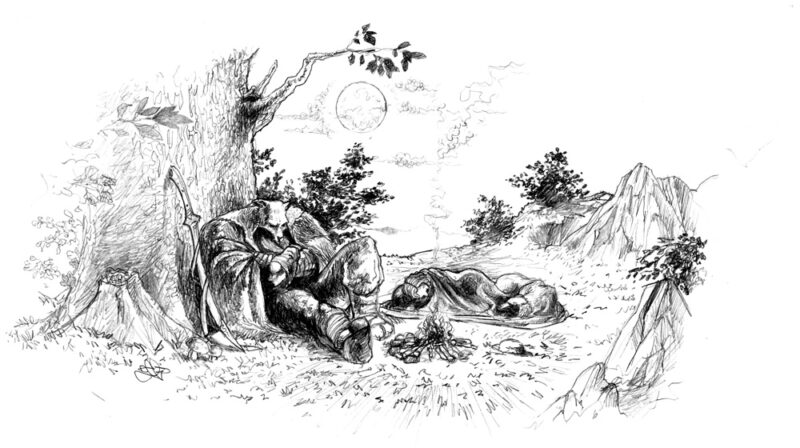 A Night by the Forest

“Come on then, lassie, tell me once again… Something came after you, but you don’t know what?”

If Senka were able to see, she would not have missed, even with her inexperienced eyes, the mocking expression in the eyes of her questioner. The enormous man raised up his waterskin, and gulped from it an amount that only he could call a sip. Then he smoothed out the two long sides of his mustache before addressing Senka again: “Talk, poor lassie, talk! Come on, string me along once again!”

And Senka again repeated her story to this strange man. He would now and again let out a few muffled sounds, which most likely signified wonder, or interest, or perhaps just a simple sign of attentiveness. The squeaking sound of the man’s large waterskin opening reached Senka’s ear more and more often, and from it the stranger swallowed larger and larger gulps. Without giving much thought to it, Senka had at first assumed that he was simply thirsty after a long days’ journey. Shortly after their encounter, when she had said that she was thirsty and would like some water, it surprised her to no small degree that the man replied: “What? Water?!” with a tone of derision in his voice, “Water is bothersome in the boot, let alone in the stomach! I do not have water, I do not… but I have wine! Do you want some?” When Senka rejected the offer without hesitation, the man seemed to think for a moment, and then in his strange euphonious manner of speaking, almost melodious despite the masculine rudeness of his voice, said that there were numerous streams in the region and he certainly planned to make camp along one of them. And with that, the man decisively stood up and in one easy movement lifted Senka onto the back of his horse. Senka had never felt lighter! She had the impression that she was lifted without a trace of effort, and her impression was not false – the strength of the man was incredible and her weight was not enough to cause even the slightest tightening in his muscles. After setting her on the saddle, he hung his large wineskin up on the horn of the saddle, letting it fall against the horse’s right flank, while tying his weapon, whose look alone would surely have frightened Senka could she see it, to hang to the left, mumbling: “That should keep it in balance, not pulling here or there.” He grabbed the horse by the reins, which he skillfully threw forward, turning them into a halter, and led his new party (a horse, a dog, and a blind girl) where he wanted. Just like the horse, the dog and Senka both accepted, without a word, this unknown man as their undisputed leader.

And so soon they found themselves sitting beside a small fire, just alongside a brook they could hear clearly babbling away, and Senka, no longer thirsty or tired, retold yet again what had happened to her. The man listened, leaning back against a thick tree, and sitting so, drinking and listening, his head would now and again fall forward, until he finally drifted off to sleep. Senka continued to speak awhile about how she and Vidra had lain unmoving for how long no one could say, revisiting that horror once more, until the heavy snoring sigh of the man interrupted her story, assuring her that he was indeed sound asleep. Then she finally fell silent, and the quiet of the night confirmed her doubts. Wrapping herself up as best as she could, Senka lay down on the ground and fell asleep, tight against her dog once again. Her tormented spirit found, with unexpected ease, at least a moment’s peace in the face of tomorrow’s temptations.